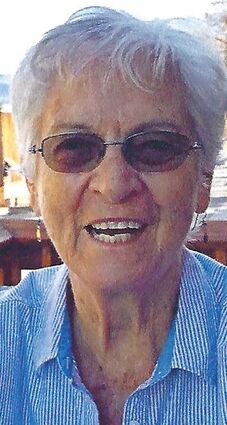 Patricia (Pat) Wilson Bensen passed away on Friday, January 28, 2022 in Reno, Nevada. She was born on August 8, 1938 in Saratoga, Wyoming to Roy E. and Mildred Woody Wilson.

Pat spent the majority of her life in Saratoga. For many years she and her husband Len operated Len’s Sport Shop. She was also a teacher in the Carbon County School District for over 30 years and was devoted to her students and to her profession. Many former students remember her as their favorite teacher because she made learning relevant and fun. During her career she was recognized numerous times with Outstanding Educator awards. Following her retirement, she continued to be active in education by serving on the CCSD school board as well as working for the University of Wyoming mentoring student teachers.

Pat was well known in the Platte Valley as a gifted musician. Throughout the years she was an organist for local churches, provided piano accompaniment to high school students for vocal and instrumental performances, and played for many local weddings and funerals. In addition, she was active in Job’s Daughters Bethel #30 and the Order of the Eastern Star Chapter #12 for many years.

After leaving Saratoga she spent several years living near her son in Grand Junction, Colorado and later in Reno, Nevada near her daughter and grandchildren. In Reno, she lived at a senior living community where she was known as “the Angel of the Promenade” for her kindness to her friends and neighbors. Most of all, Pat loved being with her children, grandchildren and extended family. She enjoyed family get-togethers, dancing, reading, playing cards, playing the piano and organ, and traveling.

Pat is survived by her son Brian Bensen (Laurie); daughter Kathy Aikin; grandchildren Anna, Mitch and Emily Aikin and Bo Schulze; sisters Jody Saba (Phil) and Janie Weiss (Rick), as well as numerous nieces, nephews, cousins, in-laws, and friends. She was preceded in death by her husband, Len Bensen, and her parents. She will be missed and will continue on in the hearts of those who knew and loved her.

In lieu of flowers, please spend time with someone you love, express your appreciation to a favorite teacher, go dancing, or make a donation to your favorite charity.