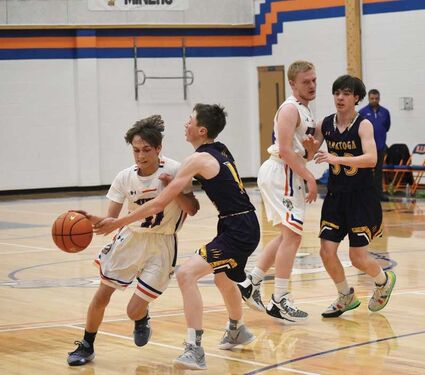 Miner Hayden Atencio works to get the ball around Saratoga's Riley Alameda during the January 25 game at HEM.

Despite having just six players, the Hanna, Elk Mountain, Medicine Bow (HEM) Miners appear determined to try and hold their own against teams with deeper benches.

The small team of Miners faced two teams from the 1A Southwest Conference as they hosted the Saratoga Panthers on January 25 and were hosted by the Farson-Eden Pronghorns on January 29.

The Hanna, Elk Mountain, Medicine Bow (HEM) Miner High School basketball team hosted the Saratoga Panther basketball team on January 25 to a game that showed the home fans that their team is improving as the season moves forwar...