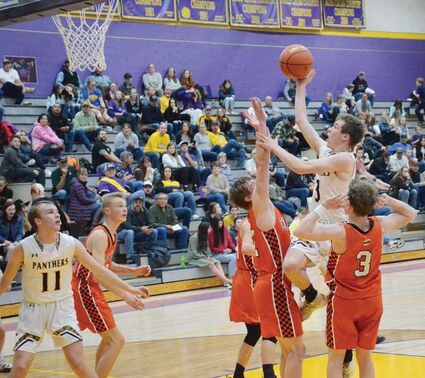 Kelton Johnson pushes through Cokeville for a basket during Friday night's home game.

The walls of the Panther Den reverberated with the raucous roars of Saratoga Panther fans as the team hosted two conference rivals for two barn burners this past weekend.

On Friday, Saratoga hosted the Cokeville Panthers resulting in a narrow loss for the hosting Panthers. The following day, the Panthers sunk their claws into the Farson-Eden Pronghorns, whose fleet feet had allowed them to narrowly avoid a loss in Encampment the night before.

Despite the split weekend, Head Coach Jason Williams was pleased overall with his team's performance considering the Panthers had struggled with sickn...