Saratoga splits weekend at home and on the road 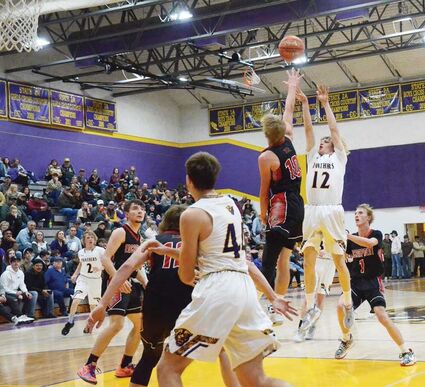 Grant Bartlett (12) goes up for a shot against the Encampment Tigers during Saratoga's home game on January 7.

The Saratoga Panthers came out of their holiday break with a split weekend as they hosted one game and traveled for another.

On Friday, the Panthers hosted their Valley and conference rivals, the Encampment Tigers, for a conference win. Then, on Saturday, Saratoga was hosted by the Dubois Rams for their first post-New Year loss. With limited varsity experience, Coach Jason Williams appears pleased with any progress his team can make this season.

The Panther Den was the place to be in the Valley on Friday night as fans from Saratoga and Encampment watched their respective teams take to the hardwood. The Tigers, much like Saratoga, are in a building year as they take what varsity experience they have to lead those who are beginning to get play time on the court.

What may have been thought to be an evenly matched game, however, quickly went the way of the Panthers. By the 2nd quarter, Saratoga led the Tigers 23-9. The Bartlett Twins, who have served as Williams' court agitators in the previous seasons, appeared to have their energy matched by Encampment's Caysen and Brayden Barkhurst as the two sets of brothers tore up the hardwood.

In the end, the Panthers won 57-36 over Encampment.

"They came out and I was real pleased with how they played. I thought we played better tonight than we did before Christmas," said Williams. "We've a lot of juniors but we don't have a lot of experience so that's what we were looking for was just trying to get better every game."

The substantial lead gained by Williams' starters allowed the coach to put in some of his less seasoned players to get them some valuable experience.

"Any experience is going to be good for them. I was really, really pleased. That's what I told them in the locker room. They got quite a bit of pressure thrown at them. They kept their composure and I was really pleased with that," Williams said. "We got in a hurry a couple times but they didn't get rattled and that's an athletic team, so they did a good job against them."

JD Buttle led Saratoga against the Tigers with 20 points and 6 rebounds and was followed by Grant Bartlett with 13 points and 6 assists. Kelton Johnson scored 9 points against Encampment and had 3 steals and Grady Bartlett went all in with 7 points, 7 assists and 7 steals. Deke Herring also contributed to the win with 7 rebounds.

Following a win on their home court, the Panthers made their way to Dubois to face the Rams, who are ranked No. 1 in the 1A Northwest.

"Dubois was a good game for us, even though we didn't play very well," said Williams. "But having a late night and an emotional game on Friday, then having to get up early and get on a bus the next morning for a four-and-a-half hour bus ride makes us better, and that was the goal for Saturday's game, was to get better."

According to Williams, the Rams were a tough team who had a new addition which made it a difficult game for Saratoga. The silver lining for the coach, however, is he was able to see some things his team can work on as the season progresses.

Grady Bartlett led the Panthers against Dubois with 14 points and 4 steals and was followed by Grant Bartlett with 12 points, 7 rebounds and 4 steals. Buttle scored 10 points and Heston Fisher scored 6 points and had 5 rebounds.

Following their 1-1 weekend, the Saratoga Panthers are now 2-3 for the season and 1-0 for conference play. They will host the Hanna, Elk Mountain, Medicine Bow (HEM) Miners at 5 p.m. on January 13 and will be hosted by the Rock River Longhorns at 1 p.m. on January 15.