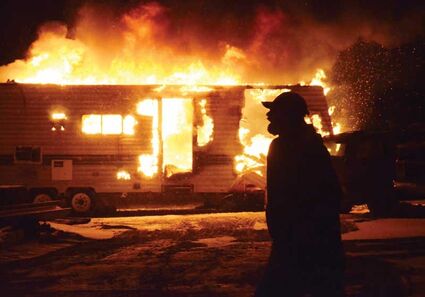 An employee of Dan's Trucking survey's the area after moving the burning camper to a spot where the Saratoga Volunteer Fire Department could better battle the blaze.

At approximately 7 p.m. on December 28, 2021, the Saratoga Volunteer Fire Department was called to 308 N. State Street in Saratoga for a trailer fire at Dan's Trucking.

The call was placed by Officer John Moore, who was on shift with the Saratoga Police Department the night of the fire. According to Moore, he had just finished conducting a routine check of the Saratoga Lake Campground and was on his way into town when he saw smoke rising from the east side of Saratoga.

The trailer, a 5th wheel camper, was gutted by the blaze. While nobody was in the camper at the time, the Saratoga Sun wa...