Ready to balance the books 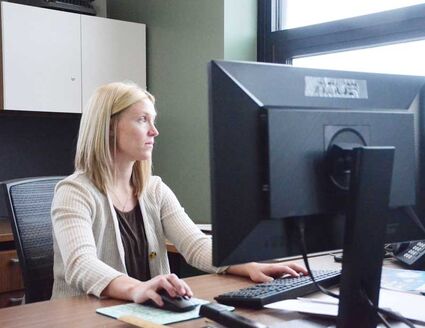 Lindsey West was appointed as Carbon County Treasurer on December 7.

Lindsey West may be the newest face leading the Carbon County Treasurer's Office, but she isn't new to county government.

West was appointed to the position of Carbon County Treasurer by the Board of Carbon County Commissioners (BOCCC) on December 7, filling a vacancy left by the retirement of Pattie Bentsen. One of three candidates selected by the Carbon County Democratic Party Central Committee on December 4, West brings a variety of experience to her new position.

The current treasurer first began working for Carbon County in 2014 as an employee of the Carbon County Assessor's Office. West remained with the assessor's office until the end of 2017. She then joined the treasurer's office on April 1, 2019.

"It's definitely helpful to have a glimpse into what the assessor does to what the treasurer does in the sense of property taxes. The valuation aspect of it, what's in the assessor's office, so it kind of completes a full picture of valuation to levy, to tax," said West. "It also allows Renee (Snider), the assessor, and myself to work a little bit deeper into any of the corrections that need made or any issues that might arise that are related to property taxes or valuation or both."

Though she is just a few weeks into the role of Carbon County Treasurer, West said she has yet to experience many surprises. One issue which had appeared to frustrate Bentsen prior to her retirement seems to have been resolved; namely that of the new format to collect ad valorem taxes. While that process begins this month, previously passed legislation which left county treasurer's throughout the state in frustration until solutions had been reached during the 2021 Special Session of the Wyoming Legislature.

"We haven't quite got to the point where we're actually, physically, seeing that collection happen. That will start at the state level starting in January. For production of January 2022, will essentially be collected by the State a few months after and then the State remits that to us about a month after that," said West. "I think there was a little bit of the frustration coming from the State not really having anything set in place, not really giving us any information as to where they were. They did have a special session in which they kind of laid out the groundwork of how they're going to tackle this from a Department of Revenue standpoint which, I think, settled a lot of the concerns for myself."

For West, spending more than two years working with Bentsen prepared her for the position to which she was recently appointed.

"I think just having a look into the everyday life of Pattie and her including me in a lot of the stuff, it's a pretty easy transition. The move threw a little bit of a curveball. Like, 'Here's this job. You're also moving buildings' but the girls were great," West said. "Everything worked about as good as we could have hoped it to. No curveballs yet. Not going to say that's not going to happen but I'll keep my fingers crossed."

Though she was appointed to the position, West will need to run for the seat in the 2022 election if she wishes to remain as Carbon County Treasurer. As an elected official, West said she takes the role seriously.

"Transparency in government, I think, is more important to people now than it ever has been. You want to be someone that the public can turn to, they can have a conversation with, they can ask the tough questions without there being an issue," said West. "I would just like the residents of Carbon County to know there's availability here and any questions that they have that pertain to this office, I'm certainly happy to answer and if I'm not the right person I can help them find the right person to answer those questions."