Miners dig in against teams with deep benches 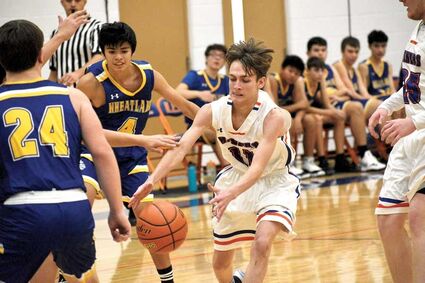 Hayden Atencio has pure focus on getting the ball in the game against Wheatland Sophomores on December 13.

The Hanna, Elk Mountain, Medicine Bow (HEM) Miners played their first game on December 13 to a home crowd against the Wheatland sophomores. The Miner basketball team is down to six boys and player Rayce Ward was starting the game with a nagging injury which had the coaches careful how much they used him.

"With the first weekend tournament cancelled (Carbon County Classic) we started the season with Wheatland's Sophomore team," Head Coach Cliff Jones said. "It is nice to start the season with a win and I felt we did some good things considering it was our first game of the season."