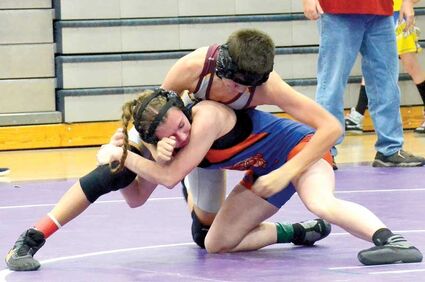 McKaylee Widdison works to get out of a hold at the Saratoga Triad.

On Thursday the Hanna, Elk Mountian, Medicine Bow (HEM) Miners wrestlers traveled to Saratoga for a Triad meet with Laramie JV and North Park . The HEM Miners had been scheduled to go to an invite in Lusk the week before, but the weather forced the Miners to cancel the trip.

For their first outing, the wrestlers did well according to Head Coach Robert Riddle.

"Anthony (Solaas) was 2-1," Riddle said. "McKaylee Widdison was 0-2, but she wrestled out of her weight class for both matches."

The other HEM wrestlers were able to get wins in their matches.