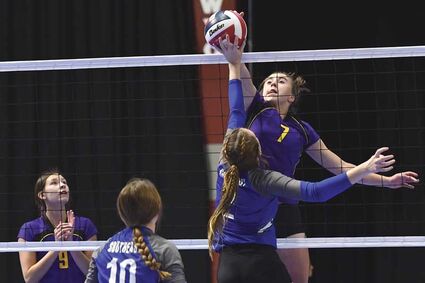 Saratoga's Whitney Bennett (7) works to get the ball over to the Southeast Lady Cyclone's court during the quarter-final round of the 1A Volleyball State Championship on November 4.

The Saratoga Lady Panthers made their way to the 1A State Volleyball Championship in Casper over the weekend of November 4-5.

Facing off against two teams, Saratoga was able to show their skills. They first battled the Southeast Lady Cyclones before facing off against the Little Snake River Valley (LSRV) Lady Rattlers, the Saratoga Lady Panthers played a total of 6 sets.

Getting swept up by the Southeast, Saratoga scored 14 points in the 1st set ending 25-14 to the Lady Cyclones. The Lady Panthers slashed into the 2nd set with only a four point difference. The Lady Cyclone...