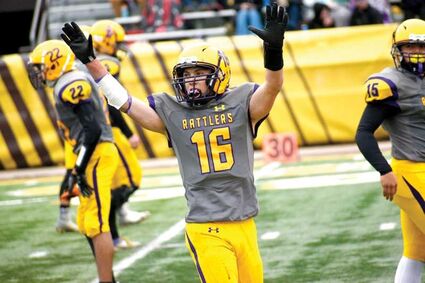 Seth Maxson (16) works to get the Little Snake River Valley crowd active during the Championship Round.

The Little Snake River Valley (LSRV) Rattlers went to Laramie undefeated and stayed that way. The team faced the Encampment Tigers, a team they had faced earlier this season, and won 65-24.

The 1st quarter it was the Rattlers who scored first, with a pass from Zane Matheson to Jerick Martinez. The Tigers had a kickoff return from Caysen Barkhurst which put Encampment ahead 8-7 and it looked like the game was going to be a roller coaster ride.

The Rattlers quickly dispelled that idea in the 2nd quarter. Kannadis Peroulis ran two touchdowns, making it 21-8 with four minutes left in the quarte...