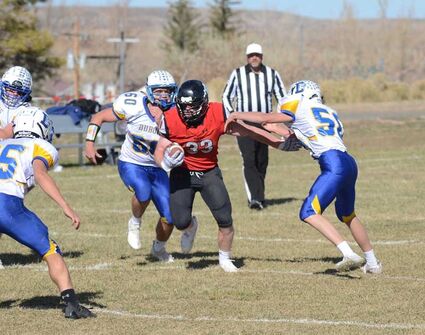 Quade Jordan (33) pushes his way through several Dubois players as he makes his way for a touchdown on Friday afternoon in Encampment.

Just three years into their six-man program, the Encampment Tigers have obtained their Golden Ticket to the University of Wyoming's War Memorial Stadium on November 12.For some of the players, who stood before the Carbon County School District No. 2 Board of Trustees their freshman year, it is an almost poetic end for their senior year. For 30 years, Encampment played for nearby Saratoga and have spent the past two seasons in a varsity schedule earning their stripes. Denied entry into the championship round last year by a single point, the Tigers secured a 20 point lead over the Dubois Rams...