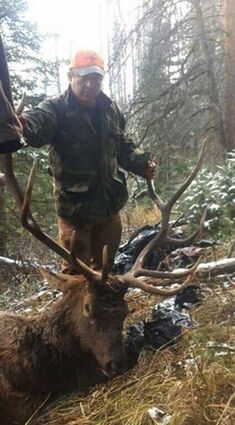 Ronald J. (Ron) Sifford, 65, passed away Saturday October 30 at Ivinson Memorial Hospital in Laramie, Wyoming from COVID-19. He was surrounded by family at the time of his passing.

He was born April 7, 1956 in Fort Collins, Colorado to Leonard and Edith (Vigil) Sifford, the oldest of four children.

He married his wife, Cyndi (Roberts), in 1976. They raised three children; Rhonda, Justin and Shawneka.

He worked for Arch Mineral Mines in Hanna, Wyoming for 10 years. After that, he logged for contractors and eventually started his own logging company. When the Saratoga Sawmill closed temporarily due to fire, he went to the oilfields with his own truck working for a contractor. After being offered and accepting from two companies, he started his own trucking operation in the oilfields. Along with trucking, he operated a water facility and a roustabout business. When the oilfields slowed down, he worked for individual contractors until January 2021 when he started going over the road hauling.

Ron was proceeded in death by his dad, Leonard, his youngest brother, Lonnie, and many other treasured family members and friends.

He is survived by his wife of 45 years, Cyndi; daughter, Rhonda (Jacob) and children Corbin, Alexia and Bowen; son, Justin (Taylor) and children Bristin, Baylin, Bighton and Payzlee; daughter, Shawneka (Josh); mom, Edith (Bill) Jones; brother, Donnie, and his sons Matt and Tell and their families; sister, Connie (Clyde) Hardner; and many other family and extended family that were special to him.

His passion was trucking, hunting, being in the mountains and projects. He always had a "project" going.

His love was his family, spending time with all of them and watching his grandkids play and grow into adults. He kept a watchful eye on all of his family making sure they were happy, safe and had what they needed. He was always proud of all of his family for their individual strength and independent ways. Rhonda, Justin and Corbin along with many friends and family have showed that strength at this difficult time while Shawneka is still recovering from her own stay in the hospital from COVID-19.

Ron had many friends and business acquaintances, but he only saw everybody as his friend. With all of his friends, and family, he hurt when they hurt and he laughed when they laughed.

Because of the circumstances of everything as we just got Shawneka home Monday, November 1, as she may be on oxygen for a couple months, the weather and COVID so heavy in the Valley right now we are going to wait until next spring or early summer to do Ron's celebration of life.