Canning and gardening topics of urban ag workshop at MedBow 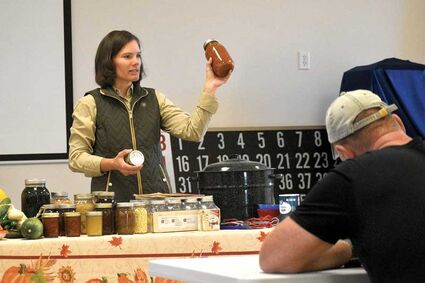 It attracted a good crowd, with participants coming from as far away as North Carolina. The event was organized by Anelyse Perue of the MBCD.

Malea Heward, a local Carbon County rancher, started the workshop by going over the self-sustainability practices in Wyoming ranching communities. She lives out at Shirley Basin.

Heward said she grew up on a dairy farm and that her husband had grown up on the ranch in Carbon County.

"Coming from an ag (agriculture) business, we get a check once a year," Heward said. "Over the years, we learned how to manage our funds and grow as much as we could to be self-sustaining because, the next year, the market may not be there."

One way to be self-sufficient is growing vegetables and fruits and canning them.

"I learned canning from my mother and, when canning, there has to be a desire for why you want to do it," Heward said. "What are your goals? For us was to save money in case the cows don't sell next year."

She said the nearest grocery store is 75 miles away.

"It just doesn't make sense to go to town all the time," Heward said. "We get snowed in several times a year and it is comforting to know we have food in storage."

Heward had brought many jars of canned produce and explained the basics of canning.

She said for high acid foods, a water bath canner was ideal. The combination of time and temperature destroy mold, yeast and enzymes which cause spoilage while creating a vacuum seal. This method works well for fruits, jellies, pickles, pie fillings and condiments.

A pressure canner is a processing method which reaches high temperatures of 240 degrees needed to safely preserve low acid foods such as meats, soups, vegetables and chili.

Heward said the correct jar should have a wide mouth, no cracks or chips and not be vintage.

"You don't want those old jars even though it is tempting to use them," Heward said. "They can crack. As far as brands go, I recommend Ball or Kerr. Also, as far as lids go, it should be two pieces. A ring and lid. Rings are reusable, lids are not."

Heward said lids should be prepared in simmering water. All jars should be sterilized before using. She said to follow recipes exactly and adjust for high altitude. She suggested keeping jars hot until filled by placing them in a large pot of boiling water, running them through a dishwasher or placing them in an oven at a low temperature.

Heward had all the equipment for canning for the audience to see. She said a canning funnel was very useful and a jar lifter and lid wand were essential. When the jars are filled, she said to let the jars cool for at least five hours.

She pointed at the end of the process, jars should be washed, labeled and dated.

"The hardest part is getting your produce ready, chopping it up and peeling," Heward said. "One thing I learned this year was to skin tomatoes was to wash them, cut them in half and put them on a cookie sheet, and put them in the oven on broil for three minutes. Pull them out and let them cool. The skin cracks right off."

She said to never stop learning.

"See what your family likes and I recommend when trying out a new recipe, do a single batch first," Heward said. "Don't be scared to try new recipes. Just stay true to canning basics."

The workshop also had Tyler Shepard, the greenhouse director for Brush Creek Ranch Resort, who spoke about soil enrichment and preparing for winter.

Tyler showed pictures of the crops being grown indoors.

"Our greenhouses are a mix of hydroponics and conventional soil," Tyler said. "The water for the hydroponics is recycled."

Tyler showed slides of the vegetables being grown in the greenhouses. He said plants like lettuces could be grown in hydroponics, but produce like carrots, beets and potatoes needed the soil for pressure for them to form.

"The reasons the greenhouses are there is so the chefs can be supplied with the freshest produce and they have a big say on what we grow because that is what they are going to use on their menus," Tyler said. "They grow things that are sort of tied to Wyoming, so you probably are not going to see us growing collard greens."

He said some crops are grown 12 months a year. Tyler also pointed out some soil crops get all the nutrients from fertilizer and not the dirt. He said the greenhouses are very productive.

"There is about 30,000 square feet of growing space," Tyler said. "We do about 75,000 pounds of produce each year from three greenhouses and we supply the restaurants year round."

He said excess produce was sold at a farmers market at the Farm in Brush Creek every third Saturday.

"The produce is usually sold out after the first hour," Tyler said. "There is also honey that ranch produces."

Tyler went over the soil components of sand, clay and silt.

"Together those all mix together to make different types soil," Tyler said. "Knowing what sort of soil you have is a good start for adjusting the nutrients you will need to add." 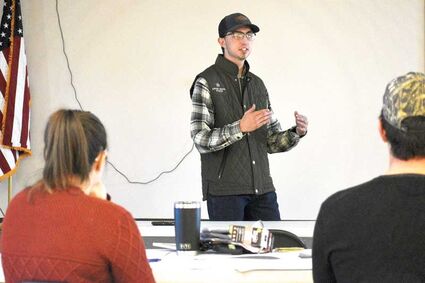 He said the University of Wyoming Ag Extensions can test your soil to know what you are working with when starting gardens. He said cover crops like legumes and clover are good to have to keep a garden healthy year long, and when the soil is turned over and adds nitrogen to the soil.

Tyler said they control insect pests with other good insects. They also use bumblebees to pollinate the plants, which are better pollinators than honeybees.

"Bumblebees do a lot more pollinating," Tyler said. "You just don't get any honey out of them."

When the presentation was over, the audience gave Tyler a large round of applause in appreciation.

As the audience enjoyed lunch catered by the Biscuit Barn out of Hanna, attendees could be heard talking about how informative the MBCD workshop had been. More than one of the attendees said they would be back next year.