Encampment shuts out Vikings 68-0 in first round of playoffs 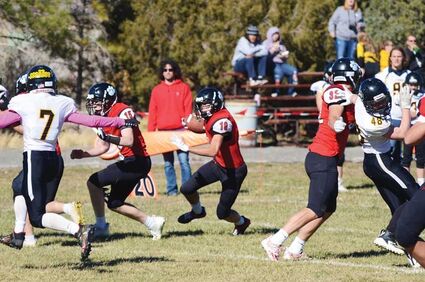 Caysen Barkhurst (10) looks for an opening as his teammates keep the Dubois Rams at bay on October 29 in Encampment.

With the regular season over, eight teams in 1A Six-Man Football sought to punch their ticket to the semi-final playoff rounds on October 29. All four of those spots are now held by the four teams from the 1A West Conference.

Encampment would use their home field to their advantage as they plundered the Vikings 68-0 on Friday afternoon.

"The boys came out and played a great game overall," said Head Coach Kegan Willford. "Obviously everyone was really excited about hosting our first playoff game. We had a great crowd and the boys fed off of that."

In all but the 3rd quarter of the game, the Tigers would put double digits on the scoreboard while handing out goose eggs to Guernsey-Sunrise. As the 1st quarter began, Caysen Barkhurst completed a touchdown following a 4 yard rush and was followed by a 3 yard rush from Quade Jordan for another touchdown to put Encampment 12-0. Jordan scored again following a 72 yard rush against the Vikings.

That, combined with a point-after-touchdown from Michael Anderson, put the Tigers ahead 20-0 as the game moved into the 2nd quarter. The long rushes continued with Barkhurst rushing for 23 yards ending with a touchdown. Jordan rushed for 46 yards and secured a touchdown as well to put Encampment ahead of the Vikings 32-0. A 61 yard pass from Kaban Pickett to Anderson added another 6 points.

As both teams returned to the gridiron, it appeared at first as if the Vikings would start to turn the game in their favor. Putting up a defense against Encampment, Guernsey-Sunrise was able to keep the Tigers to only 7 points in the 3rd quarter. A 14 yard pass from Pickett to Koye Gilbert put the initial 6 points on the board for Encampment and was followed by a conversion from Jordan following a 3 yard rush.

With the game entering the final quarter, the Tigers lead 45-0 over Guernsey-Sunrise. With a significant lead and a running clock initiated by the mercy rule, Willford gave the rest of his bench time on the field against the Vikings. Lane LaBorde was the first to score in the 4th quarter with a touchdown following a 7 yard rush. A point-after-touchdown from Anderson pushed Encampment to a 53-0 lead.

Bristin Sifford took advantage of a Vikings fumble and ran for 33 yards to score a touchdown. Another point-after-touchdown from Anderson increased the lead 61-0. Another fumble from Guernsey-Sunrise gave the Tigers yet another chance to score, this time picked up by Ryon Miller and ran for 20 yards. That touchdown, along with a conversion from LaBord after a 3 yard rush, secured the first postseason win for Encampment.

"I was impressed that our defense pitched a shutout," Willford said. "It is hard to keep any team from scoring in six-man football."

While the Tigers scored the most of any team in the first round of the playoffs with 68 points, it would prove to be one of two shutouts. The No. 3 West Meeteetse Longhorns dealt a 60-0 loss to the No. 2 East Midwest Oilers. The No. 1 West Little Snake River Valley (LSRV) Rattlers, meanwhile, secured a win against the No. 4 East Kaycee Buckaroos with a score of 62-8. Additionally, the No. 4 West Dubois Rams-who were dealt a loss by the Tigers in the regular season-exorcised the No. 1 East Hulett Red Devils in a tight 56-49 matchup.

"We have continued to keep our momentum that we have built up over the last few weeks and hopefully we can keep that momentum going into our game against Dubois," said Willford.

The Encampment Tigers will get home field advantage again as they host the Dubois Rams at 1 p.m. on November 5. The winner of this game will go on to the 1A Six-Man Championship in Laramie on November 12 to face the winner of the LSRV Rattlers and Meeteetse Longhorns game.