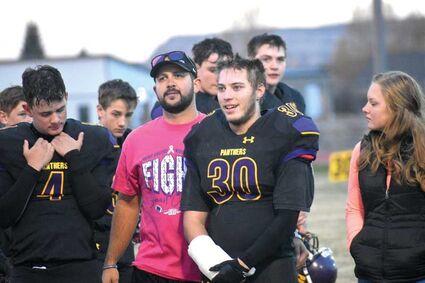 The Saratoga Panthers hosted the Niobrara County Tigers Friday but, unfortunately, the Tigers were a little too strong for Saratoga.

The Tigers are 6-2 overall while the Panthers are 3-5 overall.

The Panthers didn't go down without a fight.

"It was a great 1st half," Head Coach Logan Wright said. "Not even talking about the scoreboard, the way we were hitting and taking on blocks. They are a big tough team. They had 10 seniors, mature strong kids. Sometimes they had two fullbacks leading through the holes, so for us take on blocks and hit. I thought we were hitting hard and I was proud of the guys."

Wright knows because the game did not change the outcome of the season, he was glad the Panthers didn't come out flat.

"They came out fighting and I was super-impressed," Wright said. "That was what we talked about before the game. I said lets leave the season with a good taste in our mouth."

Wright knew in the second half he would sub no matter what the score.

"I wanted to do that because, without any JV games, I wanted all the kids to get a chance to play," Wright said. "It took me longer to do it in the second half, because the Tigers weren't. I didn't want to put in some of my kids who weren't ready physically to get run over by the other team's varsity players. It is a tough call to decide. Do I sub first and put my kids at risk or wait. But our kids are tough and if they get ran over, they will happily get back up."

It looked like Saratoga was going into the half only down 10 points. With 20 seconds left, the Tigers scored to lead 24-6.

Wright had planned to sub his players early in the 3rd, but felt compelled to wait to see if the Tigers were going to do so after they scored to lead 32-6. The Tigers kept in their starters almost the entire game.

"I started subbing pretty heavy in the middle of the 3rd," Wright said. "I wanted all the kids to have a chance to play. They put in their time all season and I wanted them to get a chance to enjoy the game. We put all our eggs in the 1st quarter and I think we did really well. That was our goal, the 1st half a varsity game and the 2nd half, I really needed to get some other kids in. I just didn't want these younger kids to not get a chance to play."

Wright admits it was tough to watch his two seniors be in their last game.

"Those two guys (Geoffrey Johnson and Alex Irby) went through everything I did when I started coaching the Panthers four years ago," Wright said. "All the highs and lows that I have had, they have been there with me. That is how you build trust; going through the good times and bad times together. I really think the world of these guys."

Johnson threw for 240 yards and a touchdown with no interceptions which, according to his coach, was Johnson's best game. He said Heston Fisher played well receiving and blocked well. 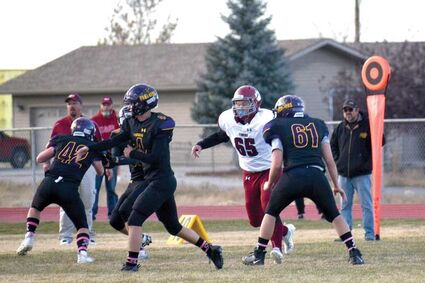 The Tigers didn't score until the 4th quarter against the Panthers who were subbing younger players. The Niobrara County team only scored twice ending the game at 48-6.

Wright is excited about next year.

He said his offensive line, Kellon Reader, Douglas Campbell and Slayd Daley, play with a lot of heart and will be back next year.

He admits the team gave up big plays this past year and the team needs to be faster.

"Heston and Tuker (Carricato) are fast, but they get caught," Wright said. "I am hard pressed to remember a game this season where we had the fastest players, but I like our defensive efforts a lot. We have a lot of potential."

Wright said he is thankful for the players who were on the team this season and is optimistic for the future of the Saratoga football team.