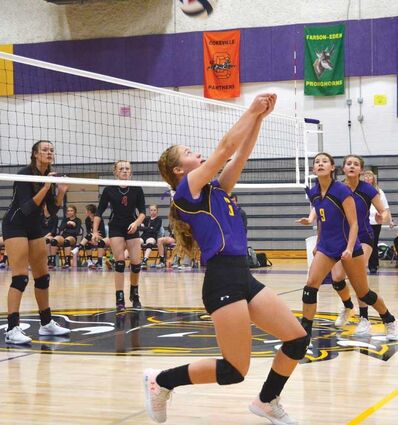 The Saratoga Lady Panthers were busy last week with three games, one on the road and two at home. Saratoga was hosted by the Hanna, Elk Mountain, Medicine Bow (HEM) Lady Miners before they hosted the North Park Lady Wildcats and the Cokeville Lady Panthers.

It was also a tough week for Saratoga as they lost all three matches.

When Saratoga hosted the Lady Miners last month, it was to the benefit of the Lady Panthers as they dispatched HEM across three sets. On October 12, however, the Lady Miners would secure their own win against Saratoga across four sets.

The victory for the Lady Miners didn't come easy. Whitney Bennett led Saratoga in attacking the net with 17 kills and was followed by Olivia Everett with 9 kills and Makenna King with 6 kills. Bennett also led in serving with 4 aces served against HEM. Josie Little and Hanna Lathrop each follows with 2 aces.

Bennett was also the defense leader with 31 digs, followed by Sadie Bangs with 21 digs and Olivia Everett with 16 digs.

On Friday evening, the Lady Wildcats of Colorado crossed the border to face Saratoga and would ultimately deal a loss in three sets to the Lady Panthers. The battle wouldn't be entirely one-sided, however, as Saratoga kept the score close throughout the whole match.

Bennett, again, led in attacking with 13 kills and was followed by Everett with 6 kills and Little with 3 kills. The Lady Panthers would serve a total of 3 aces against North Park with one each coming from Everett, Lathrop and King.

Bennett led in defense, again, with 21 digs against the Lady Wildcats. Lathrop followed with 19 digs and King had 12 digs.

The final game of the week for Saratoga was also their only conference game as they hosted No. 1 ranked Cokeville. Having dealt a loss to the other Valley team earlier in the day, the visiting Lady Panthers would do it again with a win in 3 sets over Saratoga.

Bennett continued her leading with attacks as she had 7 kills against Cokeville. Everett followed with 4 kills and King and Little each had 2 kills. In serving, the lone ace against Cokeville came from Sadie Bangs.

Defensively, both Bennett and Lathrop had 14 digs against Cokeville with Bangs digging 9 times and King following with 7 digs.

Following their three losses last week, the Saratoga Lady Panthers are 9-11-2 for the season and 2-5 in conference play.