Encampment to host a first round playoff game for first time 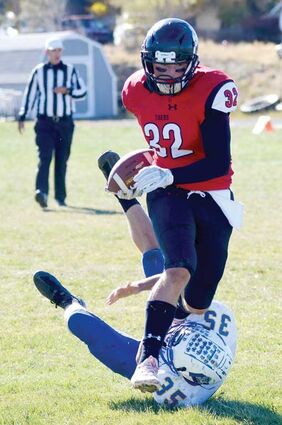 Koye GIlbert slips out of an attempted Dubois tackle during Saturday's home game.

When the final buzzer sounded on the Encampment Tigers' home game against the Dubois Rams, the hosting team had won 61-26.

This win at the final home game of the season was more than just another victory under the belt of a program in its second varsity year. With a win over the Rams, Encampment was able to hold onto their No. 2 spot in the 1A West Conference for six-man football. It also meant, for the first time in school history, the Tigers would host a playoff game.

"This game was a must win for us and the boys really stepped up," said Head Coach Kegan Willford. "We played really physic...