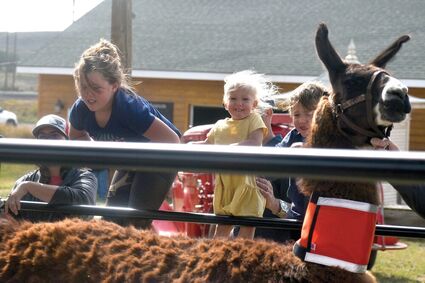 Archer, Atley and Maclean Burau check out the llamas at a three museum event on September 19.

After a difficult summer in 2020, the Hanna Basin, Elk Mountain and Medicine Bow museums invited Carbon County residents and outsiders to come and visit the Hanna Basin Museum to welcome them back on September 19.

Directors of all three museums welcomed the visitors with a food spread donated by restaurants from Elk Mountain, Hanna, Medicine Bow and Saratoga. To raise money, there was a 50-50 raffle and a silent auction which had items donated by businesses from all over the county.

There were also llamas the Priest family of Elk Mountain brought over which many people were surprised to see in Wyoming. A pen next to the llama's trailer let them wander around and look at guests who came to look at them. It was a windy day and the llamas made clear they preferred the shelter of the trailer for the most part. Still they did come out and greet visitors on this very blustery day. Children were especially delighted to see them.

Hanna Basin Museum employees explained the importance of the Miner's Cottage as guests entered the building. The house is furnished to give a turn-of-the 20th century feel and gives an idea of what coal miners lived like. The Hanna Basin Museum celebrates coal culture, railroads and ranching in the three buildings it has on premises and the Miner's Cottage is like walking back into time when coal was king in the area.

A few Hanna residents admitted it was the first time they had ever come to the museum. Those who confessed this said they were surprised at how much the museum had to offer when it came to representing the cultures of the past.

The event went from 2 to 6 p.m., so although well attended, it never got overly crowded although there were sometimes small lines to get at the food.

The food served was enjoyed.

"It is staggering, the generous nature of every restaurant that contributed food to this event," Hanna Basin Museum director Sunshine Solaas said. "The variety that we were able to offer our guests was unbelievable. Firewater in Saratoga gave us brats that were filled with cheeses and topped with special homemade condiments and the Saratoga Sandwich Shop had an array of meats, cheeses, fruits and vegetables, served with homemade crackers and bread. There was lasagna everyone raved about from Skinny's in Hanna; a dozen different fruit pies from The Virginian coming from Medicine Bow; bacon wrapped dates and cookies from the Elk Mountain Hotel and a Greek pastry dish from Crossing Café. I can't pronounce the name, but it was delicious and gone in no time. Beverages were supplied by Bow River Crossing. I really have to thank all those places for what they did and I know all the directors of the museums really appreciated their effort to make our event a success. Honestly there aren't words good enough to thank them."

The directors of all museums said they appreciated the donations of items that came from over a dozen businesses for the silent auction.

"It was tremendous to walk through the museum's two main buildings and see all this wonderful stuff," Medicine Bow Director Sharon Biamon said. "When we started this idea to get people to come back and visit the museums, we hoped that there would be generous business donors to help us and we were not let down."

Biamon explained why the three museums got together.

"All three museums are custodians, so to speak, of a history and culture that made Carbon County, Wyoming, the West and even the country what it is today," Biamon said. "In this day of technology and instant gratification it is easy not to give a thought about how our pioneering forefathers survived without electricity or running water. But we should think about it and be happy there are places like these museums that are keeping this history alive. But it isn't easy being a small town museum without any endowments. We survive on donations and grants which aren't all that plentiful at the moment."

Biamon said to remind residents of what treasures museums are, this event was created.

The efforts of the museums seem to pay off. 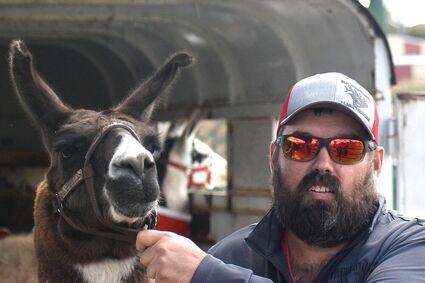 Steve Priest gets his llama, Boulder, out of the trailer to visit with attendees of the three northern Carbon County museums welcoming back party held at Hanna Basin Museum.

"Sure we are happy to get some funds as it is getting harder and harder for a small museum to support itself," Solaas said. "But for me, to hear it was a first time visit was the real success. We at the museums build these wonderful collections of artifacts from the past, and they need to seen to be appreciated. Plus coming to a museum, you learn and that is never a bad thing."

The three museums hope to make this into a yearly event with each museum getting an opportunity to play host.

"There is a lot of synergy with these three museums because our culture is connected," Biamon said. "Plus all three museums combined have a lot to offer. It is just reminding people we are here and they should support our efforts to keep history and culture of the West alive for future generations."

For many of the visitors this past Sunday, the museums made a positive step to doing just that with this event.