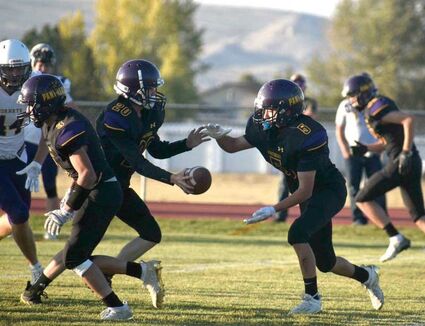 Quarterback Frank Crimmins hands off the ball to Josiah Stockwell during Friday night's game against the Pine Bluffs Hornets.

The Saratoga Panthers had the Pine Bluff High School Hornets as their opponents on Friday for their homecoming game.

Although the 1st quarter had the Panthers and Hornets scoreless until the last minute and a half, the Pine Bluffs team came out on top 52-0.

Head Coach Logan Wright played the game without his starting quarterback, Geoffrey Johnson, who got hurt on September 14 during practice.

"He tweaked his achilles in practice on Tuesday and I knew by Wednesday he was not going to be able to play," Wright said. "So I did try and hide it. I didn't even tell the team. I had Frank (Crimmins)...