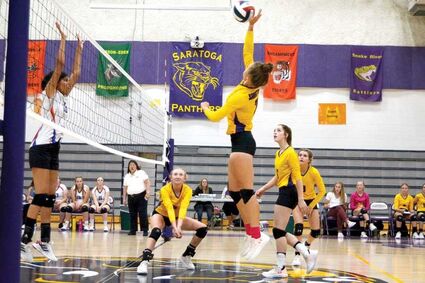 Whitney Bennett goes up for a return during Tuesday's match against the HEM Lady Miners.

Kicking off their duo of homecoming matches, the Lady Panthers hosted HEM for a victory in 3 sets. Winning by 4 points in the 1st and 2nd set, Saratoga clawed into the Lady Miners as the first two sets each ended 25-21 with the Lady Panthers leading. The Panther Den roared with the cheers of many fans at the weeknight game.

Shayley Love, head coach of the Saratoga Lady Panthers, said "The crowd was definitely a factor in our momentum, having a loud exciting crowd really helps with the atmosphere. We really appreciate everyone coming out to support us."

That momentum carried into the 3rd set with the Lady Panthers sinking their teeth into HEM with a nearly 10 point lead. Saratoga took the 3rd set 25-16, ending the match.

The Saratoga netters were in attack mode with six players scoring kills Tuesday night. Whitney Bennett led the team with 12 kills, followed by Hanna Lathrop with 6 kills, Makenna King with 5 kills, Shelby Knotwell with 4 kills, Emelia Anderson with 2 kills and finally Olivia Everett with 1 kill for the team.

Not to leave their court undefended the Lady Panthers dug in deep with 53 team total digs. Whitney Bennett had 17 digs, followed by Makenna King with 11, and Emelia Anderson with 7 digs.

"I felt the girls did a nice job of keeping their composure during the match. As a team we have some things to work on in order to prep for Farson this weekend, but I look forward to a good match on Saturday," said Love.

Saratoga defended their home turf fiercely in the 1st set as they won 25-14, taking a bite out of the Lady Pronghorns. The 2nd set saw Farson-Eden try to run from the Lady Panthers' grip as it ended 25-20 with the Lady Pronghorns leading. Both teams brought intensity to the 3rd set

finishing at 25-23, with Saratoga leading.

The teams seemed evenly matched as their sets were highlighted by long volleys and multiple dives on both sides of the net.

The roar of fans filled the Panther Den in the 4th set as the bleaches rattled with cheers while the Pronghorns and Panthers battled point for point past 25. The Lady Panthers clawed their way to victory scoring, 30-28 in the 4th and final set of the night.

"It was a great game for us.  After a long homecoming week it is nice to get a conference win.  I was very proud of the girls and how they have really worked on staying composed," Love said. "Our passing is something we've worked a lot on and it has come along in just a week's time.  Now we just need to work on better communication as a team and things will start to click for the girls."

Bennett led Saratoga in attacking the net with 20 kills against the Lady Pronghorns as she was followed by King 15 kills. Everett had 3 kills while Knotwell, Lathrop and Anderson each had 2 kills. King, meanwhile, led in serves with 5 aces against Farson-Eden. Knotwell served 2 aces and was followed by Everett and Anderson, who each served 1 ace.

The Lady Panthers also did a lot of digging with 147 team digs against Farson-Eden. King led with 35 digs, Bennett followed 34 digs, Everett had 27 digs and Anderson had 26 digs.

Following their two wins, the Saratoga Lady Panthers are 6-4 for the season and 1-1 in conference play, putting them in 3rd place in the 1A Southwest Conference. Saratoga has two more conference games this week as they are hosted by the Little Snake River Valley (LSRV) Lady Rattlers and the Cokeville Lady Panthers.