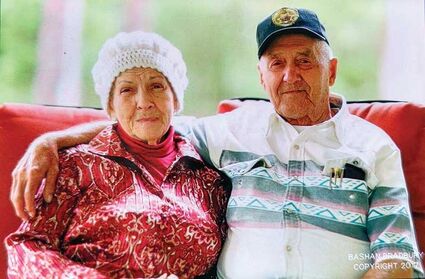 Levi and Shirley Whitfield  enjoyed more than 66 years together until death parted them when Levi passed away on June 4, 2021. Their separation was brief , however as Shirley passed away on  August 14, 2021

Levi was born on January 10, 1932 to Allen Edgar Whitfield and Hattie Ellen Adams Whitfield in Old Joe, Arkansas. He was one of 12 children and grew up playing music and working hard.

Shirley was born November 24, 1934 to Floyd Norman Hickman and Nola Faye Newman Hickman in Mountain Home, Arkansas, and met her future husband through music when her father invited Levi to their home for an evening to play. Levi played guitar while Shirley played piano and accordion.

The couple were married on May 25, 1955 and had two children, Floyd L and Faye Ellen, whom they raised in Wyoming after moving there in 1958. The family first lived in Jerry Park, Wyoming, where Levi worked for a timber company, then moved to Saratoga in 1961, where they both worked various jobs while raising their children.

They were preceded in death by their parents and several of Levi's & Shirley's siblings.