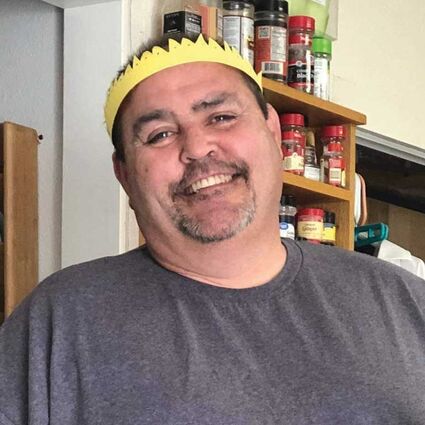 *Editor's Note: After going to press, the Sun was informed an account would be set up at RNB State Bank in Saratoga instead of Bank of the West.

Additional Note: Philip's service will be 1pm at Valley Chapel in Saratoga on Saturday, September 11. *

Philip Lee Robinson, age 56, passed away September 4 at Memorial Hospital of Carbon County in Rawlins. He was married to the love of his life, Eva Lane Robinson, and has three wonderful sons, Logan, Lane, and Landon.

Philip was born July 12, 1965 to Cordy and Tony Robinson at a jail in Laramie, Wyoming. This was a go to story for him, as the hospital he was born in was later turned into a jail and is currently a parking lot. He was raised and educated in Laramie, Wyoming where he attended WyoTech. Immediately after he began his employment with Union Pacific railroad. He worked for thirty-seven years, until he was medically retired. He met his wife in Laramie and they married in 2003.

Philip was a very active gardener and he was a member of the Dirt Diggers Garden Club in Encampment of which he always referred to all the ladies as his "sisters".  He also enjoyed chainsaws, Chevy vehicles and was very dedicated to his wife and three sons. He was a loving, kind, caring family man. He was always up to the task of helping any and all community members, whether the task be chopping wood, mowing lawns or any other tasks they needed done.

Survivors include his wife, Eva Robinson; his sons Logan, Lane and Landon Robinson of Saratoga; mother Cordy; brother Tony, and sister, Tammy all of Laramie. His in-laws, James "Randy" Lane and Kathleen Lane of Saratoga; brother-in-law Jimmy Lane of Laramie; sister-in-law Jessica Lane, along with numerous aunts, uncles, cousins, nieces and nephews, extended family members, and friends who are family. He was preceded in death by his father Tony Robinson and grandparents Carlos and Tillie Sanchez.

Services are pending and will be announced on the board in Perue Printing. In lieu of flowers, donations will be accepted at Bank of the West for the family.