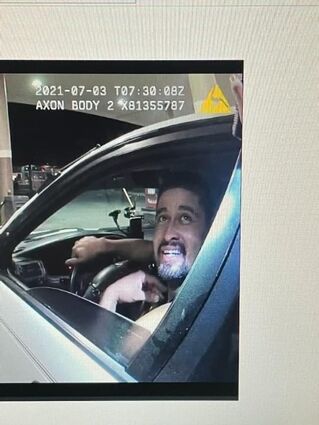 Local law enforcement are searching for a suspect, considered armed and dangerous, in the Encampment and Riverside area.

*Editor's Note* An earlier version of this story cited an "active shooter situation" as the reason for the two-hour delay. This has been corrected to the reason being an individual who may be armed and dangerous.

Parents of Encampment K-12 School students likely woke up to a shock Thursday morning as they were informed of a two-hour delay to the school schedule due to an individual who may be armed and dangerous.

The situation began early Thursday morning when a car chase which began in Colorado ended in Riverside. The suspect, who had wrecked the vehicle, continued on foot as the search for him carried on through the early hours of the morning and into sunrise. The Carbon County Sheriff's Office, the Encampment Police Department, Saratoga Police Department and Wyoming Highway Patrol were all involved in the search for the suspect who is considered armed and dangerous.

"Law enforcement are in the area looking for individuals involved in an incident," read the alert. "Please be advised to shelter in place. Keep doors and windows locked. Do not answer for anyone other than law enforcement."

At 4:45 a.m., the Carbon County Sheriff's Office lifted the shelter in place order but advised Encampment and Riverside residents to continue to be on the lookout for the suspect.

Around 6:30 a.m., Encampment K-12 School announced a two-hour delay to school on Thursday.

"Lieutenant Hobbs from Wyoming Highway Patrol advised us to be on the lookout for an individual that may be armed and dangerous in the Town of Encampment. Law enforcement is looking for an armed individual out of Colorado," read the notice from Encampment K-12 School. "Therefore, Encampment School will have a 2 hour delay this Morning (August 26, 2021). No other Carbon 2 campus is affected. We will keep you posted."

The suspect is a Hispanic male, 30 years old, five foot ten inches tall and 210 pounds. He is wearing a white shirt and has a goatee.

The Saratoga Sun spoke with Carbon County Sheriff Archie Roybal at approximately 11:30 a.m. on Thursday, who stated canvasing of the area was ongoing. Though the search for the suspect was still ongoing, Roybal said he was pleased with how the local and state law enforcement agencies were working together to protect the community.

As of 12:30 p.m., according to Lieutenant Caleb Hobbs of the Wyoming Highway Patrol, the search of the area had been suspended. Hobbs informed the Saratoga Sun no connection to the suspect had been found among local residents as none had spotted him. Being a Colorado resident, it was believed the suspect had headed south back into Colorado rather than north from the Encampment/Riverside area.

At approximately 5:45 p.m., multiple law enforcement agencies including the Carbon County Sheriff's Office and the Wyoming Highway Patrol were in pursuit of the suspect after they had stole a Dodge Ram from the area and proceeded to take Highway 70 to Baggs. Reaching speed of up to 90 miles per hour, the suspect was able to evade road spikes set up to slow the vehicle down. Sweetwater County Sheriff's Office was also called in during the pursuit.

As of 6:44 p.m., the truck had been incapacitated and the suspect apprehended on Highway 789.

A more detailed story will be published in the September 1 edition of the Saratoga Sun.