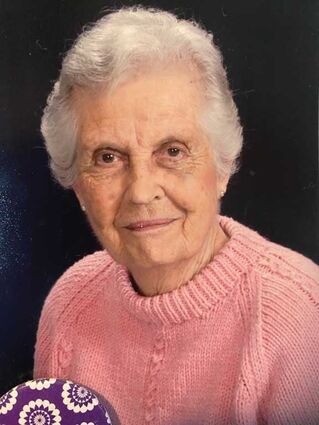 Shirley Jnell Willford was born on July 22, 1933 in Omaha Nebraska, to Homer Albert Whitlock and Aileen Janet Milisen Whitlock. She was the oldest of two children born to that union. She grew up in Laramie, Wyoming and graduated from Laramie High School in 1952.

After high school she attended the University of Wyoming studying elementary education and was a member of the Kappa Delta Sorority.

While attending the University she met Bill Willford, a student in the college of agriculture and a member of the Farmhouse Fraternity. They began dating and during that time Bill returned to Saratoga, Wyoming to help with his family's ranch. Bill and Jnell continued to correspond and they would get together as often as they could. They were married on June 26, 1954 in the United Presbyterian Church in Laramie.

Jnell and Bill built their home on the Willford Ranch and it was there that they raised their four children: Brad, Burt, Marcie, and Brian. Jnell loved being on the ranch and there wasn't anything she couldn't do. She could drive a tractor, dig post holes, fix fence, irrigate, help pull calves and lambs. She didn't even mind having a bum lamb in the utility room on occasion.

Bill loved horses and Jnell learned from him how to ride. She and her Mother-in-Law Jo were featured in the Country Gentleman magazine in 1955. Jnell was a sharpshooter with a gun and always kept one by her back door just in case!

Jnell devoted a lot of her life to being an educator in some fashion. She was a well-loved substitute teacher for the Saratoga schools for many years. Jnell also taught swimming lessons and taught countless people how to play card games, especially her favorite card game of Bridge. In her later years, when living in Missouri, she taught an elderly friend who was in the nursing home to read.

A competitive spirit, Jnell never just let anyone win in any kind of a game, no matter the age or experience of the competition. Whether it was on the dirt court at the Willford Ranch, in the gym, or outside during recess, Jnell was known to win a lot of games of PIG or HORSE.

She was in Bowling Leagues and Dart Leagues. She was a member of the Bridge Club. Jnell played on the Saratoga State Bank women's softball team. Bill and Jnell were always supporters at all the sporting events for Saratoga. They never missed a football, volleyball, basketball, baseball game, wrestling match or track and field event that their children were participating in.

In 1983 they were awarded the Super Fan award by the Saratoga High School coaches and players. In 1985 Jnell was chosen as Carbon County Ranch Woman of the Year. Bill and Jnell were members of the Cowboy Joe Club for many years and were avid Cowboy fans. Even after moving to Missouri, Jnell would still watch the Wyoming football and basketball games whenever they were on the television.

Multi-talented Jnell loved playing the piano with Bill and the kids standing beside singing. Her sharp mind loved Crossword puzzles and her other favorite daily activity was watching Jeopardy. Jnell was never idle even when watching television.

She was always sewing clothes, patching jeans, or knitting sweaters and hats. She made many quilts and afghans for friends and family.

In 1978 when Bill was told he would need to be on a dialysis machine, this brilliant, capable woman took the training so she could provide this life extending service to her beloved husband on the ranch they loved. This enabled Bill to be able spend his last years on the Willford Ranch and not in Denver.

Bill passed away in October 1983. Several years later, Jnell moved into town in Saratoga and also had a home at Seminoe Reservoir. Many fun times were had during the summers at Seminoe, when her grandchildren would come to stay with her, and she would teach them how to catch walleye and to watch out for rattlesnakes.

In 1991, Jnell moved to her farm in Piedmont, Missouri and enjoyed meeting the people in that small town and becoming a part of that community. She was always going into town to play cards, going to church or meeting her friends for lunch. Jnell loved being out on her farm and the quiet solace it provided her.

Jnell passed away at her home in Missouri on June 15, 2021 at the age of 87. She is survived by her children Brad (Ann) WIllford, Mrs. Burt (Tammy) Willford, Brian (Christie) Willford, and Marcie Rollison; nine grandchildren; four great grandchildren. She was preceded in death by her parents Homer and Aileen, her husband Bill, and son Burt.