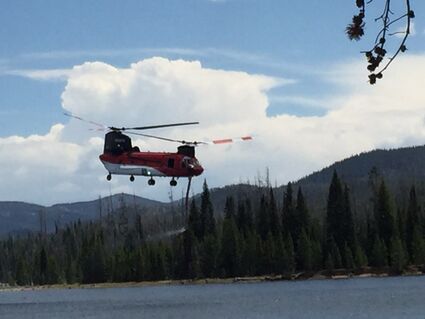 On Monday afternoon, a helicopter takes water from Hog Park Reservoir to fight the nearby North Fork Fire.

The National Forest Service now puts the North Fork Fire at approximately 13 acres. Two hotshot crews, a Type 2 hand crew, three engines, a Type 1 Heavy Helicopter and a Type 3 Helicopter are being used to fight the fire. Wednesday is expected to be a big operational day as they hit the fire hard.

The North Fork Fire, approximately four miles west of Hog Park Reservoir, is not the cause of current heavy smoke in the North Platte Valley according to Lenny Layman, Carbon County Emergency Manager.

Originally estimated at approximately 26 acres in size this morning, more accurate mapping by the United States Forest Service puts the size closer to 12 acres. While Carbon County agencies did initially respond to the fire on Sunday, the USFS now has command of the fire.

While air drops of water were performed yesterday and today, the USFS also worked on getting hot shot crews on-scene today with the hope of establishing a perimeter. According to Layman, on-the ground crews stated that the North Fork Fire was not creating enough smoke to create the haze currently enveloping the area.

That smoke, instead, is coming from fires in Colorado on Bureau of Land Management land.

It is believed at this time that, of the multiple lightning strikes in the Sierra Madre Mountain Range over the weekend, one of them was the cause of the North Fork Fire.