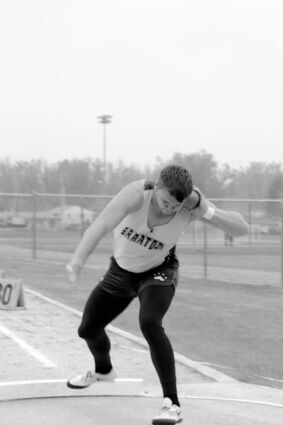 Noah Rimmer prepares to put the shot at Kelly Walsh High School during the State Championships.

Coach Rex Hohnholt's Saratoga track and field athletes placed very well while competing at the State Track and Field Championships in Casper. While neither the boys team or girls team came away on top, two athletes returned home as individual champions.

Beginning in the track events, Whitney Bennett took 3rd place in the 400 meter dash with a finishing time of 1 minute, 2.16 seconds. Bennett also competed in the 300 meter hurdles, where she finished with a time of 47.10 seconds and came in 1st plac...