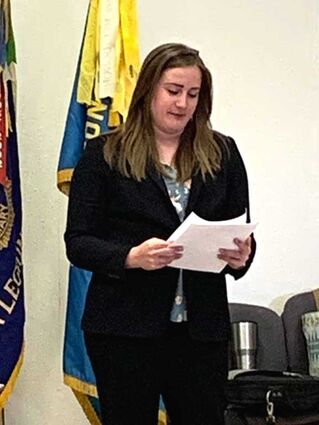 Brittany Nyman reads from a prepared speech to the Carbon County Republican Party on May 1.

Brittany Nyman, who served as chief deputy coroner under Zamora, will be presented to the Board of Carbon County Commissioners (BOCCC) during their May 4 meeting in Rawlins. As was previously reported (see "No finer professional" on page 1 of the April 28 Saratoga Sun), Zamora's retirement was announced via letter at the April 16 meeting of the BOCCC.