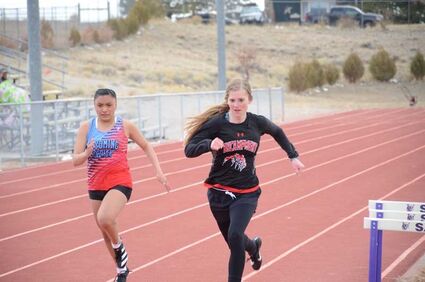 Encampment's Kayla Smith races towards the finish line on Saturday.

The student athletes of Encampment track and field didn't travel far this weekend to compete as they attended the Burt Willford Memorial Invite in Saratoga on Saturday.

While Encampment had been scheduled to compete in Laramie on Friday, the winter-like weather that has plagued Wyoming recently led to Head Coach Kegan Willford forgoing the event. Likely a wise decision as his track and field athletes competed well in Saratoga, despite the cooler temperatures.

"Overall, I thought our team performed well with the temperature being colder for this meet," said Willford. "I think a lot of our at...