From two towers to one? 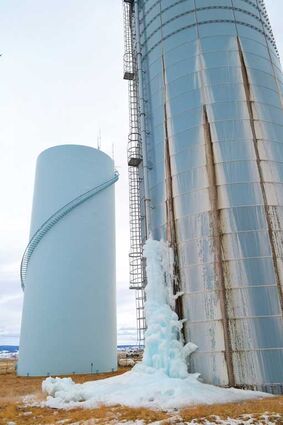 Rather than repair the multiple leaks in the bolted tank west of Saratoga, the Saratoga-Carbon County Impact Joint Powers Board appears to be considering demolishing the structure all together.

Rehabilitation of a leaking, bolted water tank west of Saratoga appears to be off the table.

Discussion of the tank came up during the April 14 meeting of the Saratoga-Carbon County Impact Joint Powers Board (SCCIJPB) with two vastly different estimates from two companies to repair the tank. For the past several years, the tank has had either massive water stains or large chunks of ice along its side.

When the special election for the One Percent Specific Purpose Sales and Use Tax (6th penny tax) was held on May 7, 2019 one of the projects listed for Saratoga was the rehabilitation of the...