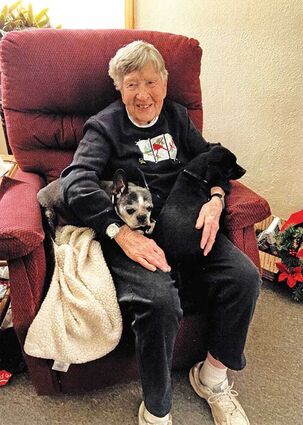 Betty Pearl Bartlett Eaton was born in 1928 on the Seaverson Ranch, 12 miles west of Saratoga. Her parents, Garland and Pearl Bartlett, were both children of English immigrants who were early Utah pioneer stock. They moved to the Rawlins area to work on the railroad sometime after 1915 and ended up working for Mr. Seaverson on Jack Creek.

Betty lived there with her parents and two brothers until during the Depression in 1936 at which time they moved to the Hennesy place on Methodist Creek where they lived for about four years. Her father purchased the Hennesy place and the adjoining Kingman and Adams Ranches. The family had only lived on the Kingman Ranch for a few months when her father died very unexpectedly. Betty was on the only daughter and the apple of her father's eye, she was 12 at the time of his death. Her two brothers were teenagers and her mother a young widow left with a ranch to manage. This began many tragedies in Betty's early life, but never-the-less they were great human faith building blocks for her.

Her early school experiences were in a county school at the Boden place. She continued her education in Saratoga where she worked at the Nelson Cafe during her four years in high school. After graduating from Saratoga High School, she attended Westminster College in Salt Lake City for two years. She returned to Saratoga during the height of World War II where she did some substitute teaching and where she also managed the Nelson Cafe until her marriage to Wm. Eaton in 1948.

Betty's mother had been an active Rebekah member since the age of 18. The one thing she would not forgo during the Depression was the paying of her lodge dues. Many sacrifices were made to do this and for her to attend her meetings. Her dedication to the Rebekahs earned her the Decoration of Chivalry in 1988 and set the example for Betty to join the Rebekahs at the age of 18 and become a life-long member. Betty and her mother built a strong bonding relationship due to the hard work and adversity in their lives.

After Betty's marriage to Wm. Eaton they ranched in the Saratoga Valley, during these years they were ranching on Lake Creek. In 1951 her husband, Wm. Eaton, who was then a returned World War II veteran, was called back to service for the Korean Conflict. This brought about many sacrifices and hardships for Betty. Giving up their home and a promising future created a great loss both financially and emotionally for the young family. Betty's life took many rough turns but deep and meaningful experiences resulted from them. Betty waited tables, milked cows, hayed, sold eggs, worked in numerous stores while raising her young family, which at the time included Deb and Billy.

Billy was quite sick as a young baby and it was at this time that young girl of about 12 entered the Eaton family. Pat was in need of a home and family and, at the age of 12, was not even in school. Not having any extra money, but an enormous amount of love and compassion, Betty took Pat into the Eaton family and made her one of her own. Pat was in and out of their lives until the Eatons got a court order awarding them direct custody.

Jerry and Drake, twins who came to Saratoga just out of the U.S.M.C., somewhat destitute with no meaningful family in their lives found refuge with the Eatons who took them in and gave them food and place to live in exchange for some labor on the ranch. It was brought to make living without adding extra people, but Betty once again dipped deep into that boundless love and kindness. But alas, another person showed up and was also added to the family.

Roger, an acquaintance of Jerry and Drake in the service, came to town, also destitute, and Roger came a part of the Eaton household. It was at this time that Mike was born and, although things were not simple nor easy, Betty managed to keep a large house and work full time away from home or on the ranch. Those early years of struggling and strengthening helped her through life's daily struggles.

One by one; Pat, Jerry, Drake and Roger moved on to get married, go to school or work and leave a void in Betty's life. But little did she know that there would be many challenges ahead. A long time friend of Betty's mother, Frannie Hook, became ill with cancer and Betty helped take care of her. Each night, Betty would care for her for six to eight hours while continuing to care for Ruth Doughty, Frannie Hook's sister. Betty continued to do so many caring and thoughtful things for individuals she knew were in need.

Betty and Bill continued to ranch until 1975, at which time they purchased Eaton's Western Wear store and moved into their new home four miles west of Saratoga.

Betty's mother lived to be 95 years old and, during the last years of her life, Betty was a shining example of the Lord's teachings of love and honor thy parents as she literally gave up most of her own life to be with her mother on a daily basis. She visited, took her mother on rides, to coffee at Ralph's so that she could visit with friends, shopping and many other things that her mother showed a desired to do.

Betty and Bill were even further challenged when they were blessed with the adoption of their grandsons, Laf and Michael. She loved and care for them. Through this love, they grew and had opportunities that they might never have had. Her son Mike had a serious accident, one that was very difficult for the family to bear, but through Betty's strength and her ability to face and deal with whatever hardships one must bear, the family was able to gather strength and deal with one more difficult situation.

Along the way, she had time to serve in the American Legion Auxiliary where she ascended to District President, State Chaplin, State Vice President and State President. She even served as a national committee woman in the Legion Auxiliary, as well as serving in all positions in the local unit. She is a lifetime member of the Church of Jesus Christ of Latter-Day Saints where she has served in the Youth Primary and Sunday School and Relief Society.

Betty Pearl Eaton was initiated into Sierra Madre Rebekah Lodge No. 27 on December 22, 1946 and held continuous membership since. Serving as Noble Grand in 1960, she served as Representative to the Rebekah Assembly of Wyoming in 1961 at the session held in Greybull and as District Deputy President in 1961 and 1962 and is now serving as District Deputy again.

Lastly, all through the year, Betty Eaton has always been a listening ear and confidante too countless people and families in this Valley. Her reputation and respect is everywhere and her strength, even on a daily basis, helped each and every one so unselfishly. She is a wonderful person, mother, daughter, friend, lodge member and community person. She deserves all our unending respect and consideration for there are none among us who have given more, expected less and have been graciously satisfied to have been able to have listened to someone's burdens.