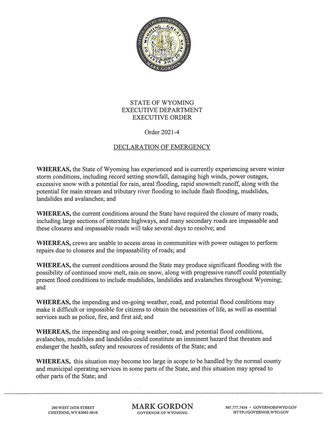 Responding to requests from affected counties, and following a thorough review of conditions, Governor Mark Gordon has issued an emergency declaration to facilitate a coordinated response in the aftermath of a severe winter storm that has affected portions of the state.

The emergency declaration allows the director of the Wyoming Office of Homeland Security (WOHS) to mobilize state and federal personnel, resources and organizations to address the impacts of the storm. It also directs the Adjutant General, in consultation with WOHS and the Governor, to deploy, if needed, the Wyoming National Guard to areas of the state that have been identified for emergency assistance. No Guard members have been activated at this time.

"The scale and intensity of this storm have caused severe impacts to our transportation infrastructure and agriculture producers," Governor Gordon said. "As the scope of the situation unfolds and with the possibility of flooding as temperatures warm, it's imperative we make all our resources available to respond to the needs in our communities."

The snowstorm on March 13-14 delivered more than 30 inches of wet, heavy snow to southeast Wyoming, closing Interstates 25 and 80, causing power outages and leading to the closure of city, county and state offices and school districts for multiple days. Secondary roads in many counties remain impassable. Several counties in the affected area are also evaluating emergency declarations