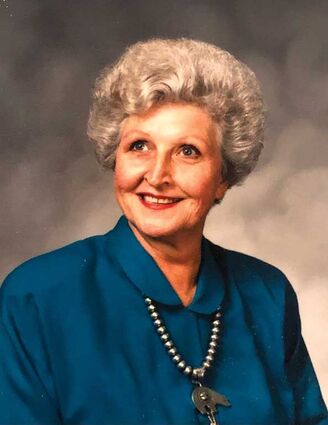 *Editor's Note: An earlier version of this obituary had Charlotte's maiden name and not her married name. The Saratoga Sun apologies for the error.*

Charlotte Mary (McKee) Orton was born on August 4, 1928, in Pottersville, Missouri to Clyde A. and Lottie V. McKee.  Her family moved to Colorado soon after, where she graduated from Grover High School in 1946.  She was very proud of lettering in basketball as a Grover Rabbette.  Being one of nine children, Charlotte was instrumental in taking care of her younger siblings.  She attended two years of college at Northern Colorado Teachers' College and, during that time, worked at Ericson's Flower Shop.

In 1947, the McKees moved to Elk Mountain, Wyoming and settled on a ranch on the Medicine Bow River.   She met John A. Orton in Elk Mountain and after a short courtship they were married on October 24, 1948. John and Charlotte began their marriage living at the 2J Ranch and later moved in to the town of Elk Mountain. They had three children Buzz, Cis and Kris.

Charlotte was an accomplished seamstress who shared her skills with countless young ladies in Carbon County as a 4-H leader for many years.  She prided herself in teaching her daughters and granddaughters to sew.   Charlotte's door was always open where there was a fresh pot of coffee, and she certainly would not let anyone leave hungry.  Her cinnamon rolls were legendary.  She was a self-taught artist who left many beautiful landscape paintings for her family to enjoy.

John and Charlotte moved to Torrington, Wyoming in 1976 and lived there until 1981 when they moved to Cheyenne when John was appointed the state Commissioner of Agriculture.   While living in Cheyenne, Charlotte volunteered her talents with the Old West Museum by restoring and reproducing period clothing. She sewed the clothing for the Cheyenne Frontier Days Queen and Court.

Charlotte was blessed with an exceptional memory and could recall details of family connections and old time stories of Carbon County.  She was a very sentimental woman who adored her family.  As she aged and she was no longer able to entertain, Charlotte had a way of making care givers and other acquaintances feel very important in her life.

In February of 2019, Charlotte moved to Torrington and resided in the Goshen Care Center. She passed away peacefully on March 1 in the presence of her family.

Charlotte's celebration of life will be held July 17 in Torrington.

In lieu of flowers, memorial donations may be made to the Goshen County 4-H Foundation.