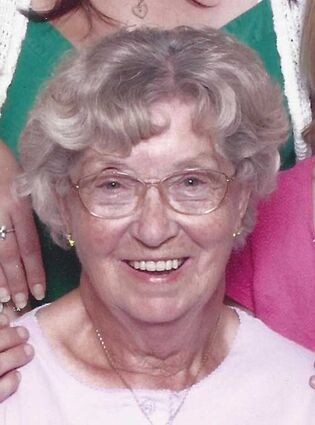 Betty Jean (McLennan) Wade rushed into Jesus's arms Sunday, March 7, 2021. Born in Laramie, Wyoming. She resided in Encampment, WY in the summer and Port Isabel, TX in the winter. Betty passed away in Laramie after a week of visitation with many loving family members.

Betty was born on August 25, 1928 to Zelpha Zola (McFadden) and David Homer McLennan. She grew up in Laramie and on December 11, 1946 married the love of her life Walter Otis Wade. Together they raised their five children: Mike, Steve, Ron, Pat, and JoAnn, along with any strays the boys brought home. Betty and Walter embarked on many adventures at home and across the country. She helped Walt build mobile home parks, but her real passion was funding, building, and maintaining Church's of Christ and fellowship halls. She was a certified ceramist, a great cook, and homemaker. Betty was pretty sure you could not have family reunions often enough and made sure they happened frequently. Betty loved the Lord and followed His teachings. She loved all of her church families. After Walt was called home Betty went on many trips and adventures of her own; most notably touring the Holy Lands and riding a camel around the pyramids of Egypt.

Private family services will be held. A Celebration of Life will be announced at a later date.

Go to www.montgomerystryker.com to send condolences or to sign the online guestbook.