Saratoga fends off conference rivals to enter regional quad at No. 1 seed 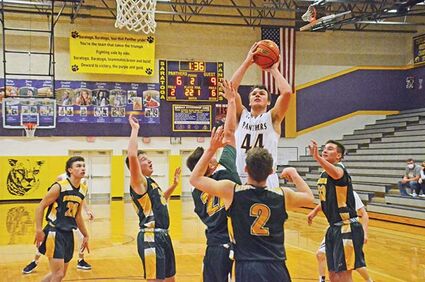 Noah Rimmer takes aim during the 2nd quarter of Saturday's game against the Pronghorns.

The Saratoga Panthers held onto their No. 1 spot in the 1A Southwest Conference as they fended off three conference foes last week.

On Tuesday, Saratoga narrowly defeated their Valley and conference rivals, the Encampment Tigers (13-3, 5-3) and secured a substantial win against the Little Snake River Valley (LSRV) Rattlers (1-13, 0-8) on Friday. Then, on Saturday, the Panthers secured a single-point victory against the Farson-Eden Pronghorns (11-4, 5-3).

When Saratoga entered Tiger Nation earlier in the season, Encampment dealt a loss to the Panthers that knocked them f...