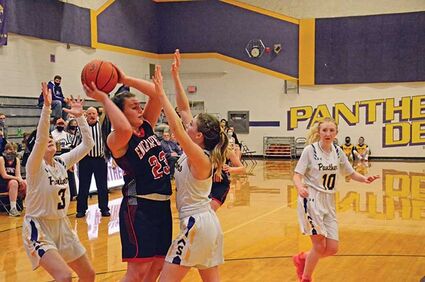 Lizzi James (23) works to keep the ball away from the Lady Panthers on Tuesday.

Last week, the Encampment Lady Tigers finished out their regular season as they went 0-3 in one conference game and two non-conference games. With no ticket to the regional tournament, the Lady Tigers are finding the silver linings from a season that didn't quite go their way.

"Obviously we are disappointed about our season and how it turned out but when you encounter the injuries that we had during the season and the limited number of players, it makes it difficult to compete," said Clint Bromley, head coach of the Lady Tigers. "Our younger players got a lot of playing time that will be valuable next season."

Entering the Panther Den, Encampment put up a decent first half against the Lady Panthers. While the game began with Saratoga sinking a 3-pointer in the opening seconds, the Lady Tigers appeared to be unphased by Saratoga's offense.

Through the first half, in fact, Encampment trailed the Lady Panthers by a handful of baskets with the 1st quarter ending 14-20 and the 2nd quarter ending 21-24.

When the two teams returned to the hardwood in the second half, the Lady Tigers would see Saratoga work to put some distance between the scores with the 3rd quarter ending 22-39. Encampment, however, would work in the final quarter to close that gap with a game-ending score of 34-43.

"We played a good first half and just didn't get it done in the 3rd quarter," C. Bromley said. "We actually tied Saratoga with field goals and lost the game 12 to 3 at the line."

Allison Bromley led the Lady Tigers against Saratoga with 11 points and 2 steals and was followed by Lizzi James with 10 points, 4 assists and 3 steals.

After a couple days to lick their wounds, Encampment hit the road again as they traveled to take on the Lady Longhorns. Unfortunately, their time in Rock River would result in yet another loss as their season drew to a close.

"We didn't shoot the ball well and it cost us the game," said C. Bromley. "Again, we tied Rock River with field goals and lost the game at the line, 15 to 8."

Again, A. Bromley would lead Encampment as she scored 8 points and had 5 rebounds and James followed with 6 points and 3 rebounds.

For their final home game of the season, Encampment hosted the Lady Miners. For the first half of the game, the Lady Tigers would keep pace with visiting HEM as they went into halftime tied 24-24.

When both teams returned to the court, however, the Lady Miners would get busy digging as they put space between themselves and Encampment.

"We played one of our better halves of basketball and were tied 24 to 24 at the half," C. Bromley said. "Again, this game was decided at the line with HEM making 11(points) and Encampment 5 (points)."

With these final three games, the Lady Tigers end their season 3-13 and conference play 0-8. While the team is losing four core members of the team-James, Shiann Finney, Grace Tieszen and Amber Stubbs-there is still varsity experience to build on going forward.

"Next we go back to juniors and freshman again and there will be a short time to get the freshman up to speed before they are put on the varsity floor," said C. Bromley. "We are excited to have the new freshmen and hope that everyone who played in junior high will be in uniform with us next year."