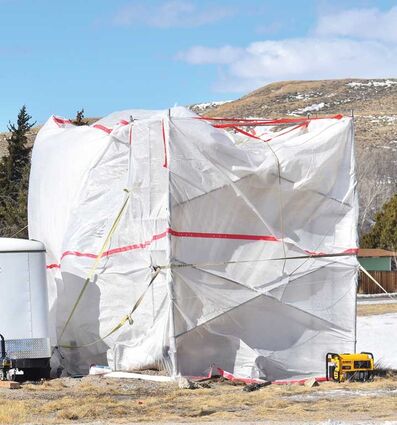 A tarp around the Soldiers Monument in Hanna had residents wondering what was going on inside.

The structure Solaas is talking about is the called the "Soldiers' Monument" that was built and dedicated in 1920.

The Rawlins Republican mentioned it in the paper right after the dedication.

"The Fourth of July was celebrated in great style in Hanna, beginning Sunday morning, with the unveiling of the soldiers' monument, which was a very solemn service. Mr. A. D. Buford made the presentation for the people of Hanna, while F.D. Erb responded for the soldiers and sailors. Immediately after the unveiling the band struck up the 'Star Spangled Banner.' The ex-service men and all wore uniforms and made a splendid showing. There were foot races, donkey races, horse races and fat men's races, and everyone had a good time."

World War I monuments are unique in the West and this one had a special attribute. Behind the plaque, the town had put in a time capsule of sorts. In a cigar box, they filled it with pamphlets espousing the fear one should have of the Huns (Germans) and other bits and pieces from the time. The plaque listed the 111 servicemen who had served in World War I.

The monument sits right at the intersection once across the bridge. In 1984, the high school decided to clean the plaque and put in their own time capsule. Unfortunately, when they did this, the plaque was not embedded as strongly as before.

When the old Hanna Elementary School was being torn down about a half dozen years back, the monument was almost next to in proximity and the plaque was mysteriously pried loose and taken. For some time, the plaque remained missing and the monument had a gaping hole in which the weather kept eroding.

Hanna Marshal Jeff Neimark recounts when the plaque was found along WY 72 that runs through town.

"It was found when they were mowing," Niemark said. "I guess whoever took it realized they could not do much with it, so they abandoned it. We were lucky to have found it."

Pam Paulson, the chairman of the Hanna Basin Museum Board, has the plaque and is carefully cleaning it to keep it on the National Historic Registry.

Once the plaque was found, the residents of Hanna had hoped the monument would be restored to its former glory.

It was not to happen quickly.

The board contacted several contractors to fix the monument, but because the monument's outer layer is stucco, the few capable of working with this material did not want to come to Hanna.

Finally High Peak Stucco and Stone out of Greeley, Colorado was contacted in October and owner Jose Arredondo came out to Hanna and looked at the damaged structure. He agreed to take on the job, but he could not come until February.

"I have had numerous people approach me about getting it fixed," Solaas said. "We have had donors with money, but until we got someone who would fix it right, money wasn't the issue. To me, it has been about getting something our ancestors put forth generations ago for us look at, that we can get it back, for future generations to look at.

Arredondo said he would be taking off all the old stucco and going to the original stone. Doing a job in winter any place in Wyoming would be challenging with all its snow, but in Hanna, with the wind, the job could be that much harder. Arredondo said a tarp needed to be put up around the monument to keep the elements from destroying his work.

"I understand this is very important to the community and it is important to me make the town happy when I finish my work," Arredondo said.

A tarp went up and the work began.

Arredondo started the project on February 8. Wind and snow storms hit all that week.

"Actually, the snow on top kept the tarp stabilized somewhat," Arredondo said. "The wind for several days has been crazy."

Arredondo was joined in the work by his son, Jonathon.

Solaas checked on the work during the week and was amazed at how fast Arrendondo and his son were getting the job done. Solaas and the board had not expected it to be done faster than two weeks at best. In truth, given what Hanna winters can do to stop any work cold, if the project would be done by the end of March everyone would be happy.

Arredondo was done in 10 days.

The plaque will have to wait a little time for better weather before it is installed. Arredondo made a copy of the plaque to make sure it will fit.

When asked if working on the monument was difficult he replied that for people that work hard, nothing is too formidable.

"People that are lazy, they will always complain how tough it was," Arredondo said.

The younger Arredondo was proud of the work he and his father did. 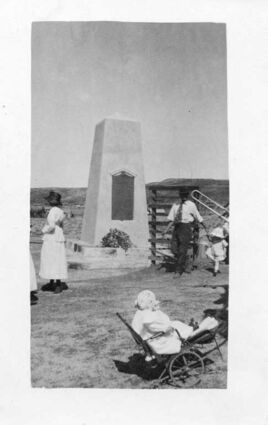 A photo taken at the 1920 July 4 dedication shows a brand new monument.

"This has been restored to last another 100 years," he said. "It will give me pride to bring my daughter here when she gets older and tell her, your daddy and grandfather worked on this. Then it is my hope, she will bring her children and they will see this monument not only the great servicemen of World War I, but a monument on what her family did for this community."

The Hanna Basin Museum board is looking forward to when the plaque is put in and the monument will be whole again. A dedication is tentatively planned for Memorial Day.