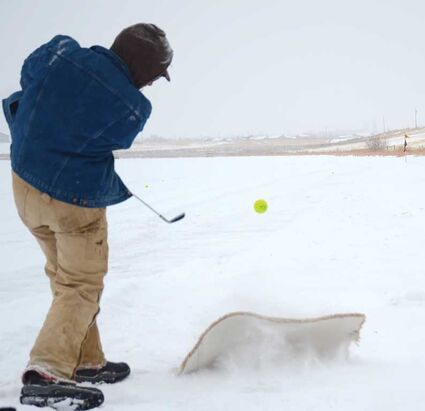 An ice golfer gets catches some 'turf' while swinging away on Saturday morning.

The inaugural Carbon County Classic Frozen Fore appeared to be, by all counts, a success for the Saratoga Historical and Cultural Association (Saratoga Museum) on February 13.

Despite the overcast sky and the cool winds, nearly 70 people headed out to Saratoga Lake to venture out on the ice and try their hand at some winter golfing. According to Kimberly Givens, director of the Saratoga Museum, a total of 68 people were in attendance and 17 teams tried their hand at 12 holes.

The participants appeared to have a very "ice" time as they either walked or drove from hole-to-hole. While nobody w...