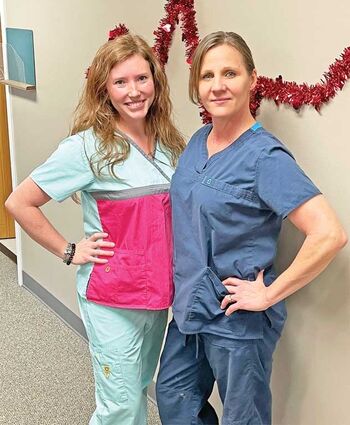 There's a lot more that goes into running a successful medical clinic than just having a doctor or nurse who can see patients. What goes on quietly in the background is equally important to the smooth running of the operation-and ultimately to the healthcare of the community.

Consider, for a moment, the jobs of Lisa Bifano and Elizabeth Grubert at the Platte Valley Clinic. Bifano, an LPN, and Grubert, a medical assistant, work as a team with Dr. Adrian Durham and Nurse Practitioner Susan Foley to meet the varied medical needs of the North Platte Valley community.

Bifano, for example, takes on wound care, a course of treatment for hard-to-heal wounds such as pressure ulcers. Additionally, chances are that if you need to have blood drawn for a lab test or to treat polycythemia, Bifano will be at the other end of the needle. If, on the other hand, a urinary drug test needs to be performed for an employer or the DOT, Gruber can handle it on her own.

Bifano and Grubert take on the tasks that don't require the same special training that Durham and Foley have, yet are still a necessary part of daily life at the clinic. If a patient needs to be stabilized for a ride in the ambulance to the hospital in Rawlins-something that can happen several times a week-Bifano can take vital signs and start an IV.

As a medical assistant, Gruber is on hand for procedures Dr. Durham performs, staging the procedure room and laying out the appropriate instruments and supplies. The pair also takes X-rays under supervision of the providers for the clinic as well as other providers, and Bifano is certified to perform Medicare Wellness Exams as part of routine medical care.

The pair has played an important role in the community's response to the COVID-19 pandemic as well, still performing swab tests as well as a rapid test procedure several times a week–nothing, they agree, like last October when they handled 543 Covid tests during the month.

Grubert started working in the front office of the clinic three and a half years ago and last year transitioned to take formal training from Susan Foley to be a medical assistant.

Even a small rural clinic sees a wide range of medical conditions and deals with serious emergencies and sometimes overwhelming workloads. Bifano and Grubert prove that teamwork between the providers and support staff is obviously the key to a smooth-running and efficient operation.