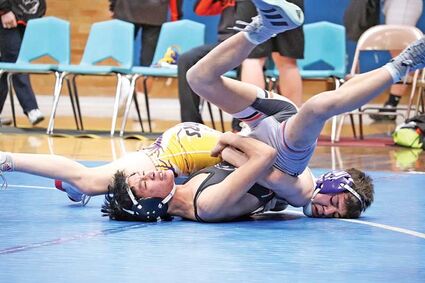 Josiah Stockwell works for a pin during the Bridgerland Tournament on February 6.

The grapplers of Saratoga High School were on the road again this week as they traveled to Lyman where they competed in the Bridgerland Tournament on February 6. While there, the Panther wrestlers saw some success as a team, keeping scores close to teams such as Thermopolis and Big Piney while coming to a tie with Jackson.

In the team score against Jackson, the Panthers went 36-36 and kept the same score in their loss to Thermopolis, with a score of 36-45. In facing Big Piney, Saratoga went 33-36.