No pressure while under pressure 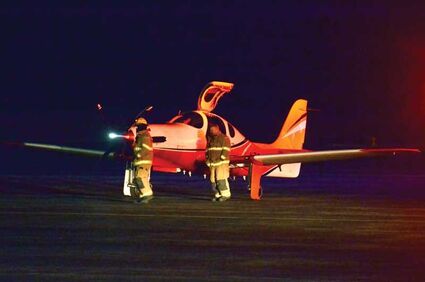 Members of the Saratoga Volunteer Fire Department examine the LancAir Evolution after its emergency landing on February 7.

Gerry Abbett was 27,000 feet in the air and traveling at approximately 350 miles per hour when the windshield of his LancAir Evolution, for all intents and purposes, disappeared.

According to information from FlightAware, Abbett and his two passengers departed Afton, Wyoming around 6:12 p.m. and were expected to arrive in Cheyenne, Wyoming just after 7:30 p.m. The single-engine turboprop never made it to Cheyenne, but instead made an emergency landing at Shively Airfield around 7 p.m. on February 7.

"When I got up here, the plane had already landed," said Larry De Andredes, manager of Saratoga Jet Center. "There were three people on the airplane, two of the passengers were in the ambulance but he (Abbett) was actually standing at the airplane and I was just asking him 'Are you okay?' and he said 'Yeah, we're all okay'."

"We believe it was because Afton had snow drifts on its taxiways and runway and we had to taxi through it and it prevented the gear door from shutting. We didn't feel it was safe to turn around and land back at the same airport with the runway conditions, so we decided to head towards Cheyenne. It's a place I land at frequently, it's a familiar place," said Abbett in an interview via phone with the Saratoga Sun. "The plane was flying fine. With the gear door not fully closed it was drag, so we were flying a little slower than normal but otherwise everything was fine."

Abbett had been in the air approximately 32 minutes when things suddenly changed.

"People don't realize it, but when it happens in a pressurized airplane the glass goes outside not inside," De Andredes said. "I just can't even imagine what this guy was in for because, immediately, you have the relative wind in your face. Not to mention, if you use a standard lapse rate of two degrees per thousand feet ... it's going to be about 50 to 54 degrees colder."

For Abbett, as soon as the windshield of his airplane had disappeared, he immediately recognized that the vessel had lost its pressure.

With no oxygen available at 27,000 feet-for reference, Mount Everest's elevation is approximately 29,000 feet-Abbett had to descend quickly. Fortunately, turboprops like the LancAir are designed to move quickly and that includes their descent.

"With these types of airplanes, you can pretty much nosedive it," said Abbett. "Our initial descent was over 8,000 feet a minute."

Abbett took his LancAir Evolution, a plane which has a carbon fiber body, from 27,000 feet to 12,500 feet within minutes-Medicine Bow Peak sits at approximately 12,000 feet-to get both him and his passengers at a level in which oxygen was available. That still left extreme cold, around minus 45 degrees celsius (minus 49 degrees Fahrenheit), and high winds coming into the plane. Through all of it, Abbett remained calm.

"I've never been the type of person that has ever panicked when something happens. Whenever something arises like that, it's almost like I get a heightened awareness. My eyes will get big and my brain will just become focused," said Abbett. "It's really hard to explain but that's just kind of the way I've always been."

Because Abbett remained calm, it also helped at least one of his passengers remain calm as well. Sitting next to Abbett was his nephew, who is also an instrument trained pilot.

"I wouldn't necessarily say he was panicked but, for good reason, he was seriously concerned. Once he looked over and he saw how I was operating and he saw what was going on, his words to me were 'That made me realize you were on it' and it helped relax him," Abbett said. "Now, the passenger in the back, he didn't know what was going on. I kind of feel like he had the worst of it because he was getting the majority of the wind. In the front, we were able use the avionics panel to kind of duck behind to prevent most of the wind from hitting us directly. He didn't have that luxury and, on top of that, he didn't have the luxury of knowing anything that was going on."

When Abbett landed his plane at Shively Airfield, that calm he had in the air remained.

"The EMT that took my blood pressure at the time just kind of shook his head and laughed," said Abbett. "He was like 'Wow, that's really good'."

Despite subzero temperatures and high speeds, neither Abbett nor his passengers were injured. This comes as a shock to both De Andredes and Bob Maddox, owner of Saratoga Jet Center.

"I am an experienced pilot and what this guy did was at the 'Captain Sully' level, maybe beyond," said Maddox in an email to the Sun.

For Abbett, however, it's difficult to see himself in a heroic role.

"If I was reading about someone else that went through that and did that, I guess I would probably think that of that person, but being myself I don't know," Abbett said. "It's hard for me to think of myself in that regard. I just did what I do." 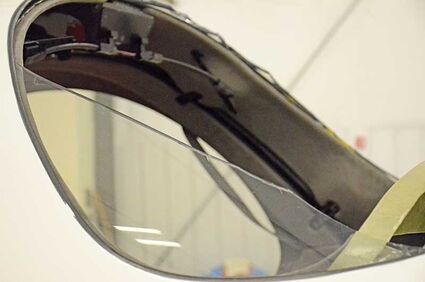 Very little remains of the windshield for the LancAir Evolution as seen from this photo.

While Abbett has returned to Indiana, his airplane has not. It is currently sitting at Shively Airfield, but out of the elements thanks to Brush Creek Ranch who has allowed Abbett to store his airplane in their hanger until he can decide what to do with it. Additionally, the National Transportation Safety Board and the Federal Aviation Administration will investigate the incident.

Abbett is thankful that he was able to land at Shively Airfield, which boasts one of the longest runways in the United States. He also credits his airplane for saving the lives of him and his passengers as much as others credit him. Along with the avionics, the heat put out by the LancAir Evolution kept Abbett's hands warm enough to operate the controls.

Said Abbett, "It did everything I asked it. WIthout that, I don't think we would have made it."