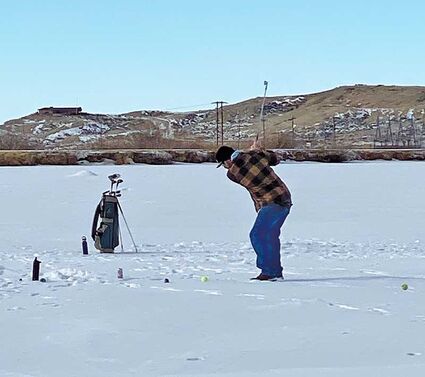 Mike Paul prepares to swing as a way to figure out distances between the holes for the Frozen Fore course.

While the weather seems to be almost unseasonably warm right now, temperatures are expected to drop in the next week or two and bring snow with them. For some, this means it will be the perfect time to catch some fresh powder on their snowmobile or snow shoe in the Snowy Range or the Sierra Madres.

For others, it will be the perfect time to work on their golf swing.

Saratoga is no stranger to people brainstorming winter events that can bring in a crowd. For 38 years, the Saratoga/Platte Valley Chamber of Commerce has hosted the Saratoga Ice Fishing Derby and, for nearly 40 years, the Lions Club held chariot races before pivoting to the intriguing sport of skijoring.

"I was re-evaluating our events because of COVID (coronavirus). We were pretty sure we were not going to be able to do the Toast to History," said Kim Givens, director of the Saratoga Museum. "I was sitting at the Wolf one day and Margaret (Weber) walked in and she just always has these great ideas. I just asked her 'Hey, what are you going to be doing this year for events?' and she came back and said 'Actually, I'm looking for someone to sponsor an idea I have'."

In 2009, Weber had attended the Ron Sessions Memorial Ice Golf Tournament held just outside of Walden, Colorado. The event was started in 2000 by the Jackson County Lions Club and, while it was cancelled for 2021, boasted a total of 57 teams in 2020 according to the event's Facebook page.

According to Weber, she had wanted to do something similar in the Valley after attending the event in Walden. What she felt was even more important than holding the event, however, was that it be organized by and benefit a local non-profit. That, eventually, put Weber and Givens together to organize the event in just a few weeks.

"Carbon County Visitors Council likes to see people coming in the winter time, so that was one of my goals was bringing people into Saratoga during the winter to help out our businesses ... and to help the museum out," Givens said. "If everything plays out really good, it looks like this just might be one of our bigger fundraisers. We've had a really, really good response from people around town as far as sponsoring goes."

While the Ron Sessions Memorial Ice Golf Tour has had up to 26 holes in past events, the Frozen Fore, as it has been dubbed, will have 12 holes on Saratoga Lake.

According to Givens, there have been a total of 24 sponsors for those dozen ice holes and a frequent vendor at the Saratoga Museum Farmer's Market has volunteered to create and donate the flags that will bear the names and logos of the sponsors.

Teams will be paired up throughout the tournament with teams keeping score of each other to "keep them honest". If you don't have a great swing and aren't always under par, though, there's no need to worry. The final determination of who will win doesn't come from the overall score, but will be determined by ice hole judges randomly sampling each team's score card on specific holes.

All 12 holes will be drilled into Saratoga Lake, at a depth of five to six inches, and while contestants will be using real golf clubs the event will use tennis balls instead of golf balls. Additionally, the "course" on the lake will be made by plowing snow currently on the ice.

While teams aren't encouraged to try and golf like Happy Gilmore, especially since the event will use tennis balls instead of golf balls, the Saratoga Hot Springs Resort has sponsored a Hole-in-One Contest. The first contestant to get a hole-in-one on the course will win a $250 golf-only membership at the resort.

With 16 teams signed up so far, Givens is hoping that the event will have 24 teams registered by the time of the event. A total of $1,500 in prize money will be awarded for 1st, 2nd and 3rd place. Entry for a team is set at $40 per person with each team consisting of four people. Along with registration to the event, contestants will be given a grab bag with items donated from various sponsors.

Food and drinks will be provided by Sweet Marie's Bakeshop and the American Legion Auxiliary.

Teams can register at https://www.eventbrite.com/e/frozen-fore-carbon-county-winter-golf-classic-tickets-135772341729. The Frozen Fore will begin at 9 a.m. on February 13 with each pair of teams beginning the event with a shotgun start.