Recounting the visit to DC

Two men with connections to Platte Valley talk about their visit to Washington, DC on January 6 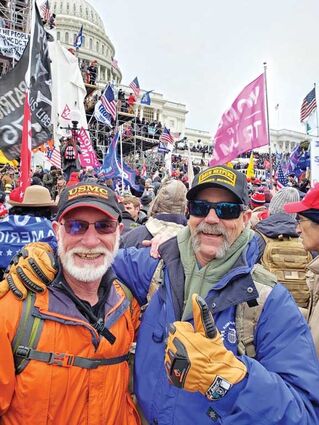 Mark Pesognelli, left, and Howard Hill pose in front of the Capitol Building on January 6, 2021 following the "Save America" Rally.

On January 6, thousands of supporters of President Donald Trump gathered in Washington, D.C. to attend the "Save America Rally", which had been organized by pro-Trump groups such as "Women for America First" and "Stop the Steal".

Of the thousands to show up, two who attended had a connection to the Platte Valley. Howard Hill currently lives in Cheyenne but had lived in Riverside, Wyoming until 2018. Joining Hill was Saratoga resident Mark Pesognelli.

In the weeks leading up to January 6, the date during which both the United States Senate and the House of Representatives were to hold a jo...