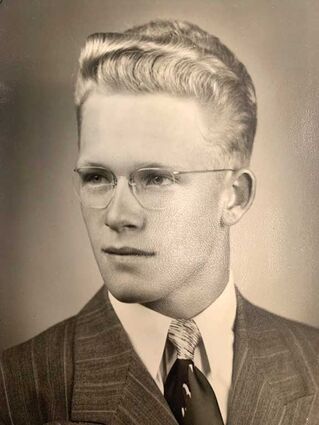 Long-time Saratoga resident Houston Valle Evans Jr. (Valle) passed away in his home early Christmas Day. Born on November 18, 1929 in the Rawlins hospital, Valle had a "life well lived" of 91 years, almost all of it in the North Platte Valley.

Valle and his family have deep roots in and around Saratoga. His mother was Leona Horn Eans, whose maternal grandparents, William Ewing Meason and Rebecca Ryan Meason, were homesteaders on Cedar Creek starting in 1879. Their daughter, Ella, married William (Bill) Horn, who had arrived from Barbourville, Kentucky and was working at Encampment's copper mine. Ella's brother, George Meason, and Bill Horn created what is still known as the Horn Season reservoir southeast of Saratoga to provide irrigation for their homestead parcels, which would have otherwise been dry.

After Valle's birth, the Evans family lived in Saratoga where his parents operated a small dairy. In 1931, the family sold the dairy to Josephine and Harold Willford and moved to Zuni, New Mexico. Valle's father, Houston, was fortunate to have a government job as a dairyman through the Depression. In 1936, the family purchased the Paulson Grocery and returned to Saratoga. As a young man, Valle often delivered goods from the store to homes and even a local brothel. Valle spent a lot of time on his grandfather's ranch on Cow Creek, the East side of Highway 230, near Treasure Island.

In 1944, after Bill Horn passed away, the family sold the grocery, purchased the Lawrence Needham ranch of Cow Creek, and combined the Horn and Needham ranches into one operation.

Valle attended the University of Wyoming his freshman, junior and senior years, graduating with an agriculture degree in Animal Husbandry. At Wyoming, he was a founding member and president of the Farmhouse Fraternity; Bill Willford was a fraternity brother. Valle attended Colorada A&M (now CSU) in Fort Collins his sophomore year. While there, he and his friends once came across a rancher with a broken-down Model T Ford. Valle offered $50 for the vehicle and the rancher agreed.

The wheels of a Model T apparently are the same width as the train tracks through Fort Collins, and Valle and his friends took great pleasure in driving on the tracks through town.

After graduating from UW in 1951, Valle joined the Marine Corp. After boot camp, he was held back to testify in the court martial trial of an abusive sergeant while the rest of his platoon went to Korea. Many of his platoon never returned.

He then spent the next two years on the base in Quantico, Virginia installing telephone systems. He returned to Saratoga in 1953 to work with his parents on the ranch. He and Elva began dating, and were married on October 15, 1955.

Valle took over management of the ranch at age 28 after his father contracted Parkinson's disease. By the time Valle was 33, he and Elva had four children. He enjoyed his young family, and often wrestled with all of them on the floor at once. When milking the ranch's milk cow, he was known to spray milk directing into the mouth of the attentive barn cat, or at his screaming children. On Saturday night, he and Elva often went dancing at Ten Mile Inn, Encampments's Pine Lodge Bar or other Valley bars and community centers.

In 1971, the Evans sold the ranch and moved to Saratoga. Valle and Elva went into business, purchased the Sage & Sand Motel and developed several real estate projects in town. Often the family rode motorcycles on weekends with the Art Zeiger and Jerry Welch families or camped with the families of friends such as Eddie, Norm and Bob Shamion, Clint Craig, Tom McGuire, Ernie Dahlke, Don Sherrod and Frances Derby. Levi Whitfield was also a special friend. Jerry Welch taught the family to ski at Ryan Park (a refresh of Valle and Elva); there were ski trips to Steamboat Springs, Colorado and Snowbasin, Utah.

Valle loved nature, the outdoors and hunting. He often hunted with son-in-law Dave Christman, Eric Nelson and Norm Heater. Valle applied for a Big Horn Sheep permit for many years before being awarded the elusive license. Norm guided Valle for nearly a month on Bennett Peak in a successful hunt.

Valle and Elva liked to dress up in traditional attire and drive their Model A Ford in Saratoga's 4th of July parade. As empty nesters, Valle and Elva traveled for several weeks each year across the U.S. and Canada in their motorhome while daughter Julie took care of things at home. Later they spent several winters in Harlingen, Texas and Grand Junction, Colorado. Valle and Elva relished the times with their children and grandchildren at their mountain property, an old mining claim southwest of Encampment.

Valle enjoyed doing a crossword puzzle each morning and, in the evening, he and Elva played the card game Ski Bo. The stakes: bragging rights.

Valle was one of the kindest, best men that one would ever now–a man who never said a bad word about anyone and had a kind word for everyone. Like other men of the Platte Valley, he was a tireless worker who would do whatever it took to get any job done.

Valle could be a prankster. One time, at Saratoga's ice fishing derby, he attached a beer can tab to a fish's mouth, and put the fish on another contestant's line. When the contestant returned to retrieve the line, he screamed as he thought he had won the grand prize! Another time, he cleaned his garage of junk, put an advertisement in the Saratoga Sun for a "yard sale" at Dave Johnson's home, then deposited the items in Dave's yard. Dave looked after the yard sale, made a profit, then placed the sole remaining chair on the roof of Valle and Elva's home. 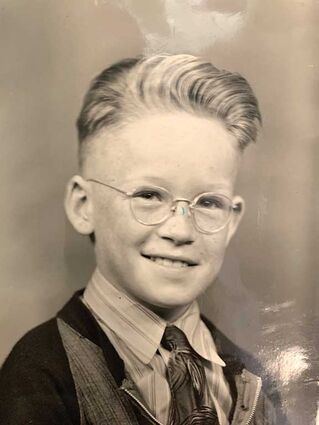 Valle was preceded in death by his parents, Houston and Leona; sister, Patty; and nephews Mike, Steve and Bruce Crow.

The family is in the process of determining the best time and place to honor Valle's life. There will be services at the appropriate time.