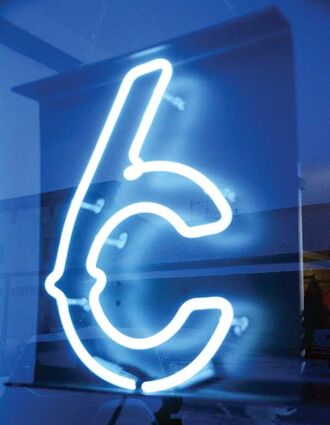 The simple yet recognizable logo for County 6 Clothing Company.

In the age of the internet and social media, branding is everything. Wyoming, as a state, is fairly easy to brand. Attractions such as Old Faithful and the Grand Tetons are internationally recognized and, in recent years, residents have come to use the state's area code, 307, as an identifier.

Branding a county, meanwhile, is a little more difficult. Danny Burau, owner of Firewater Public House (Firewater) in Saratoga, has decided to work towards that goal with the opening of County 6 Clothing Company. The new clothing company, located at 128 E Bridge Avenue and block away from his popular restaurant, is easily identified by a neon sign that combines the letter 'c' and the number six.

County 6 refers to the number on license plates for Carbon County.

"It was born of being on the visitor's council and kind of looking at some of the things-from a younger, trendier point of view-that I thought would be interesting," said Burau. "I thought, with the way stickers go and the retail stuff at Firewater it seemed like a natural extension to be like 'Let's do a little celebration of County 6' and I got this concept in my mind of combining the six and the 'c'."

Before moving to Saratoga in 2016 and starting Firewater, Burau worked in graphic design. That background would be obvious to anyone who has dined at Firewater, which has a wall that features stickers, hats and shirts with sayings like 'Good Times Valley' and 'This is Wyoming. Act Accordingly.' The restaurant even features postcards with various Wyoming animals-from prairie dogs to the jackalope-that can either be collected or sent to friends and family.

"I had run to the hardware store one day and I was walking back by and saw the 'For Rent' sign on the window of this space, so that day I got a hold of the owner," Burau said. "I got a hold of him and asked what they wanted for rent and it was one of those (things), 'Should we do this?'"

One of the contributing factors to Burau deciding to follow through with renting the space was the success of Firewater since it opened and the retail program at the restaurant.

"Just looking at the kinds of things that people seemed to like, we just took that concept and blew it out a little further. With that opportunity we could find ways to do little custom touches, tags on shirts that have little fun things on them and custom labeling inside that say little fun things," said Burau. "Just really have fun with the program the way that we couldn't quite do at Firewater and still carry those key designs here that people liked from that space."

The timing of opening County 6 Clothing Company, however, may raise some eyebrows. In November, Burau closed Firewater for the winter season, both Wyoming and the country are still struggling with a global pandemic and the summer tourism season has ended.

"I like to tell my team at Firewater that some of the best returns come from taking a risk at a time when no one else wants to, but it still felt real silly to think about opening a retail business," Burau said. "For right now, until our peak season in Saratoga is back, this is probably the longest wait I could have from the end of the previous season to the beginning of the next season."

According to Burau, while it may have felt silly to open up a retail store in the middle of winter, it didn't feel like much of a risk due to the amount of pride in Saratoga, the Valley, Carbon County and Wyoming. With that pride, Burau is taking examples of what he's seen in similar towns in the West.

"When you go to Breckenride, Colorado there's five or six or seven shops that have locally focused t-shirts that have fun sayings or graphics on them and it definitely felt like there was a real opportunity in this town with what, I think, we can all admit; we know that tourism is a major, if not the major, industry in this town now," said Burau. "It feels like this shop is pretty openly focusing on tourists with still a nod to the locals that want to wear something that represents their town."

While the many products-hats, shirts, stickers, tumblers and even onesies-bare the graphic design work of Burau, he didn't go about it alone. As he moved forward with the idea to open County 6 Clothing Company, he reached out to other graphic designers to bounce ideas off of them.

Additionally, while the apparel currently on the shelves is his design, Burau said he is not opposed to carrying the work of other artists in the area. While the goal is not to have County 6 Clothing Company be a consignment shop, he wants to carry products that fall in line with his mission statement of celebrating Carbon County. That includes showcasing photographers, crafters, sculptors and others.

A table in the center of the shop currently has shirts for the upcoming Saratoga Skijoring Races, but Burau said that the idea of that center table is to use it as a fundraising table for projects throughout the Valley. Essentially, Burau is open to using his space to help amplify other creators who are celebrating Carbon County.

"If I see something that I think answers that mission statement of celebrating Carbon County, and we can make it work in here, we'll bring it in," Burau said.

For the time being, Burau can be found at County 6 Clothing Company seven days a week from noon to 6 p.m. and he plans on using his time at the shop to get back into graphic design work. A potential project is custom designs for each town in Carbon County.

"It's exciting to me to get back into just focusing on design again," said Burau. "If I can be here doing that and running the shop and, again, being the face of one of our businesses I think it'll be a lot of fun."