Lady Tigers get some wins 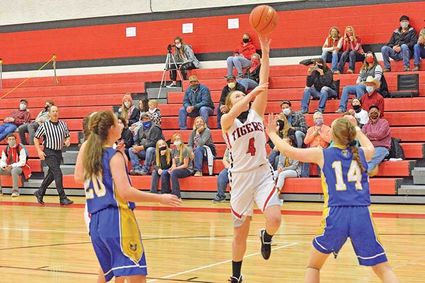 Dubois attempts to block Grace Tieszen (4) as she goes in for a layup on Friday.

The Encampment Lady Tigers are starting off their season with some wins as they hosted the Dubois Lady Rams on Friday and the Cheyenne Central Lady Indians' sophomore team on Saturday. In both cases, the Lady Tigers were able to lead by double-digits by the time the final buzzer sounded.

Last year, Dubois was unable to field a girls team and one of their own played for the Lady Tigers. This year, the Lady Rams were able to return to the hardwood with their first game being against Encampment.

In the first eight minutes, it appeared as if Dubois would be able to fe...