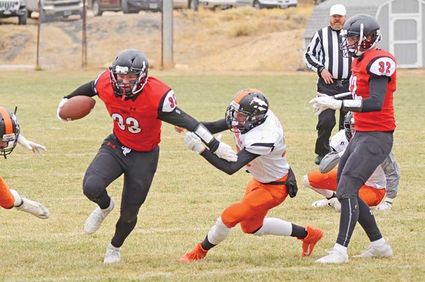 Quade Jordan works to evade a player from Burlington during Encampment's final home game this season.

*UPDATE* During the December 17 meeting of the Carbon Count School District No. 2 Board of Trustees, the board voted unanimously to permanently approve the Encampment Football program. The program will remain self-funded with the exception of the district providing funding for officials and travel to away game.

Two years after receiving permission to begin a six-man football program, the student athletes of Encampment High School will appear before the Carbon County School District No. 2 (CCSD2) Board of Trustees on December 17 to request the program be continued.

As was previously reporte...