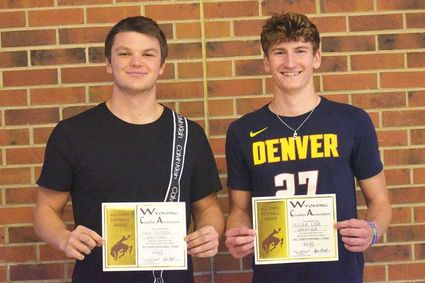 Left to right, Senior Noah Rimmer and Senior Teegan Love show off their certificate in achieving All-State this year.

Senior Noah Rimmer, who won All-State honors, was also named Defensive Player of the Year for the East Conference 1 A-9 man.

Rimmer won the same honor last year when the team was playing 6-man.

"It feels good to get the award again," Rimmer said. "I feel like it was a great year for me and my team. It was gratifying to win Defensive Player of the Year for 9-man Conference. That...