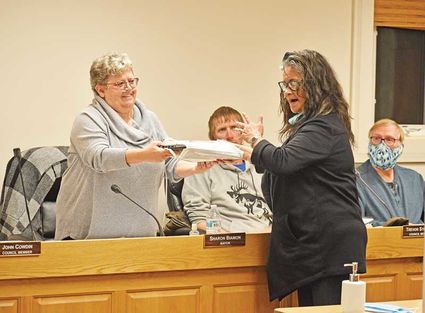 The agenda was approved in the opening minutes of the council meeting followed quickly by the minutes from the October 12 regular meeting.

Treasurer/Town Clerk Karen Heath went over the financials for the month and asked if there were any questions. There were none and the council approved paying the bills.

Mark Davidson from Sunrise Engineering said that the reseeding of the land where pipes had been put down was done. He said the $1.3 million project had come in under budget.

"It looks to be coming in from $20,000 to $40,000," Davidson said. "Oftedal really did an outstanding job and the savings says a lot about the company. They deserve a shout out."

Biaman asked if residents hooked up with Century Link were taken care of. Davidson said all lines were back up.

At this point the bonds have not been sold, but it is hoped that will change soon. In the meantime, money being collected by the municipalities from the tax is being put in an escrow account.

Wyoming Ag Magazine asked the town to advertise its airport in their periodical. After discussion, it was decided the subject needed more research. Cowdin liked the idea, but there was trepidation from other council members on what would be required from the town once the advertisement went to the public. There are some current maintenance issues that would need to be addressed. The council wanted to get more information on what it would cost and what other small airports were saying in their advertising.

Heath said she would look into finding out the information requested by the next meeting.

She introduced herself and apologized for not making a council meeting earlier. Johnson has been attending town councils throughout Carbon County since she was hired about six months ago (See "Traveling to all towns in Carbon County" on page 17 of the October 21 Saratoga Sun).

Johnson said that she hoped all towns would soon be comfortable with her to the point that they would look at her as a resource.

"I know in the past, not all towns felt that way about the CCEDC," Johnson said. "I am here to change that perception.

She said that in the seven years being away from Carbon County, she is seeing a lot of changes.

"I see so much potential in all the towns I visit," Johnson said. "I want to build off that and be partners with the towns."

She encouraged Medicine Bow to have a representative to the CCEDC.

After, Johnson spoke, the council went over the reports from boards and departments of the town.

Marshal Dave Redding said that October was the slowest month since a permanent law enforcement presence had been established in Medicine Bow.

"It has been pretty quiet," Redding said. "I had under 100 stops. I had a couple of dogs chasing deer. There was a dog that bit the game and fish guy and then the dog wasn't happy enough with that and bit me," Then Redding laughed. "This dog definitely had a problem with authority."

Biamon, who is also the director for the Medicine Bow Museum, said she was planning a Christmas Party but she was still working on it. She said that the protocols for COVID might alter what she could actually do. Biamon said she was still waiting tor the "Fossil House" to be moved. She said the contractor still keeps assuring her it will be done before winter sets in.

After Baimon finished her report, Johnson asked if she could approach the mayor. When she was told she could, Johnson came to the mayor with a package. Johnson explained that she had obtained a computer for the Medicine Bow Museum that had been donated by TriHydro out of Laramie.

The mayor was surprised and grateful.

Medicine Bow Fire Chief Peter Andrews said that Ed Standish had finished his probation and had moved up to full time in the department.

For the Fireman's Ball on December 5, the council granted an off site permit to sell beer and wine.

Strauch said the Planning and Zoning did not meet the past month, but a special meeting would be set up to go over the current map and see if there should be zoning changes.

South Central Wyoming Emergency Services (SCWEMS) representative Cindy Papisan said that Classic Air was now gone for residents of Carbon County. She said the legislature had stopped it from serving the county because it was not an insurance provider. She said that it is hoped this decision will be reversed in the year to come.

Papisan said Cathy McPherson had been hired to create a volunteer handbook to define responsibility. Currently there is no handbook.

Baimon read correspondence from "R" Addison. It was not an easy letter to read, but essentially, the Medicine Bow resident was convinced people were hacking into his computer and stealing photographs.

After the letter was read, Addison, who was present, said he wanted action taken by law enforcement. Redding said he had looked into the allegations prior and would do so again. Addison left the meeting after Redding made his remarks.

The next regularly scheduled meeting is at 7 p.m. on December 8 at the Medicine Bow Community Hall.