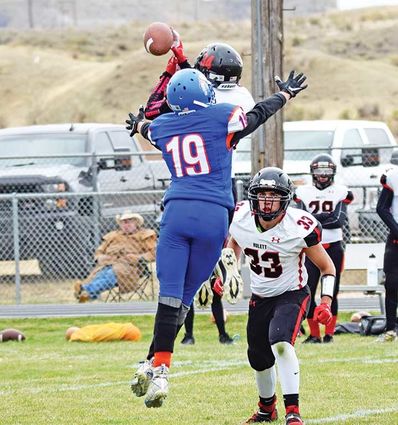 Taylor Kennedy (19) makes a defensive jump to try to stop a reception in the playoff game from Hulett last week.

The Hanna, Elk Mountain, Medicine Bow (HEM) Miners faced the number one team in their playoff division on Saturday when they went up against the Farson-Eden Pronghorns.

The Pronghorns kept the Miners scoreless and continued their march to the championship with a 0-70 win.

"Farson has a very tough physical team," Scott said. "They came out very strong. The kids gave it their best and, as a coach, you can't ask more."

Scott was philosophical about the season.