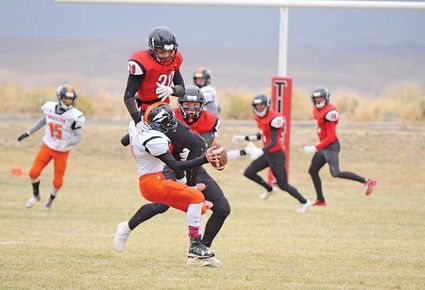 Dalton Peterson (20) flies into a player from Burlington during Encampment's final home game on Saturday.

The Encampment Tigers had already had a season of firsts this year as they had played their first varsity schedule in 30 years and dispatched the Little Snake River Valley (LSRV) Rattlers, the defending state champions, early in the season. Now, the Tigers get to add another first; playoffs.

"This is actually the first time Encampment Football has ever qualified for the playoffs," said Kegan Willford, head coach of the Encampment Tigers. "The boys have put in a lot of time getting better in the offseason and raising money to have a program and it is paying off for them with qualifying for playoffs."

While the Carbon County School District No. 2 Board of Trustees had approved a six-man football program for Encampment in February 2018, it was with the stipulation that the first two years would not be funded by the district. Instead, the students would have to raise funds to equip their team. Additionally, the first year of gameplay saw the Tigers play an entirely junior varsity schedule with no chance of making the playoffs.

Despite the cold wind and rapidly dropping temperatures on Saturday, Encampment appeared determined to prove that they had what it took to enter the playoff tournament. For their part, the Huskies were ready to put up a fight. In fact, the 1st quarter saw neither team score as both teams provided plenty of defense.

In the 2nd quarter, the log jam that prevented both teams from getting to their respective endzones broke loose as Dalton Peterson received a 20 yard pass from Kagan Gilbert to put 6 points on the board. Not long after, Peterson completed a touchdown to put the Tigers up by 12 while leaving Burlington scoreless. A safety added 2 more points and Encampment was finished scoring in the first half. A 17 yard pass by the Huskies, however, resulted in 6 points.

The Tigers went into halftime ahead by 8 points. As both teams returned to the field, Burlington appeared rejuvenated and the 3rd quarter saw both teams throwing points on the board.

The Huskies started the second half by putting 6 points on the board. That, combined with a point-after-touchdown, tied the two teams at 14-14. Encampment, not risking the chance to fall behind, quickly worked to move ahead of Burlington. A 5 yard rush from Peterson put the Tigers up 20-14. Another rush from Peterson, this one 2 yards, put Encampment up 26-14. A 22 yard rush by Casysen Barkhurst added another 6 points, putting the Tigers up 32-14.

With 2:39 left in the 3rd quarter, Burlington would go 45 yards with a kickoff return to bring the score 32-20. Neither team would score in the remaining two minutes of the quarter. In the first minutes of the final quarter, Quade Jordan scored a touchdown following a 25 yard rush to put Encampment up 38-20. Following Jordan's touchdown, Peterson scored another touchdown. That, combined with a pass from Peterson to Koye Gilbert for a conversion, put the Tigers in a 25 point lead over the Huskies.

With 6:33 still left in the final quarter, the Tigers continued to dig into the gridiron and score touchdown after touchdown. A 31 yard rush from Peterson put Encampment up 51-20. A pass from Peterson to Jordan for a conversion put them up 52-20. Peterson then intercepted a pass for a 30 yard return that brought the Tigers to 58 points.

With 5:46 left in the game, Encampment wouldn't score the rest of the quarter. The Huskies, however, would remain virtually scoreless as they secured a touchdown with a 65 yard return following a fumble and a successful point-after-touchdown.

The Tigers defeated Burlington 58-28. A game that began with neither team scoring ended with Encampment putting up 26 points to the Huskies' 8 points.

"The team really stepped up their game today and came out with a big win against a tough Burlington team. This was a great way to end the regular season and give us some momentum heading into the playoffs," said Willford. "It's really exciting to make the playoffs in our first year of being eligible."

Following their final home game win, Encampment will head into the playoffs as the No. 3 West seed and will play the No. 2 East seeded Hulett Red Devils in Hulett. 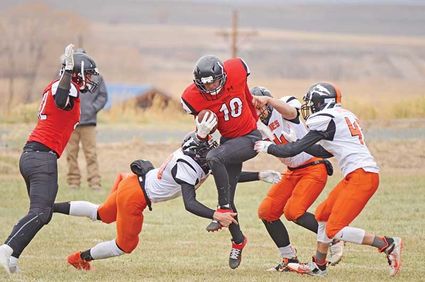 "The team is very eager to travel up to Hulett and play on Friday," Willford said.

The first round of playoffs for Encampment will begin at 1 p.m. as they are hosted by the Hulett Red Devils. The winner of that game will face the winner of the game between the Farson-Eden Pronghorns and the Hanna, Elk Mountain, Medicine Bow (HEM) Miners on November 7.